A Glimpse of Collections Items in Urgent Need of Repair

Save our books!
Help us preserve our rare Yiddish books most in need of repair
Donate

The Yiddish Book Center is embarking on an effort to do something we’ve never done before—carry out urgent conservation work on some of our most precious Yiddish books and preserve them for generations to come.

We've already rescued a yam yidishe bikher—a sea of Yiddish books—and transformed Yiddish scholarship by putting many thousands of titles online. Now it’s time to safeguard some of our rarest, most important, and most fragile treasures. Many of these are too degraded to open, let alone put through a scanner to digitize them. With skilled conservation work, all these precious titles can be used, scanned, and made available online in our digital library so that we can share their extraordinary stories with the world.

These irreplaceable books and other items are among our crown jewels. In the coming weeks, our bibliographer David Mazower will be sharing some of their stories, from classic works of Yiddish literature in urgent need of conservation to damaged music sheets and theater playscripts to the most fragile periodicals and serials.

Yiddish Music Sheets and Theater Playscripts in Need of Restoration 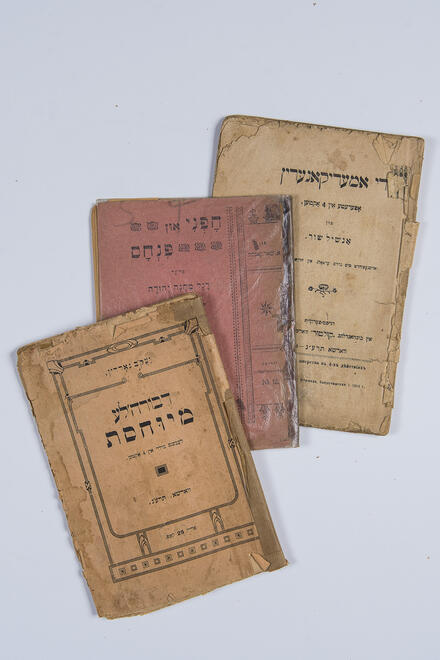 These Yiddish theater playscripts are among the rarest and most fragile books in our collection, dating from the early twentieth century and representing the work of the first generation of professional Yiddish dramatists, born in the Russian Empire. In desperately poor condition, printed on very cheap paper, they all need careful conservation work to strengthen and preserve the pages and spines. 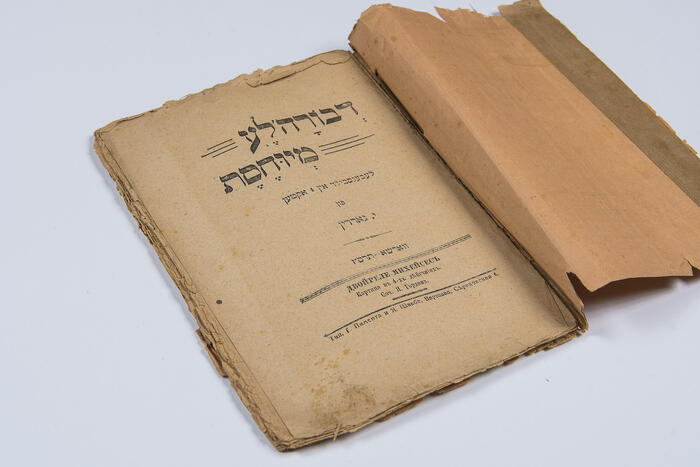 This rare example of Jacob Gordin’s play Dvoyrele meyukheses (Dvoyrele the Aristocrat) was published in Warsaw in 1906/1907 and is one of very few surviving copies. Gordin was the key reformer of the Yiddish stage at the turn of the century and a major influence on Yiddish theater in New York. Our copy is so fragile that it can hardly be opened, but the text is complete, and with the right conservation measures it can be fully restored. 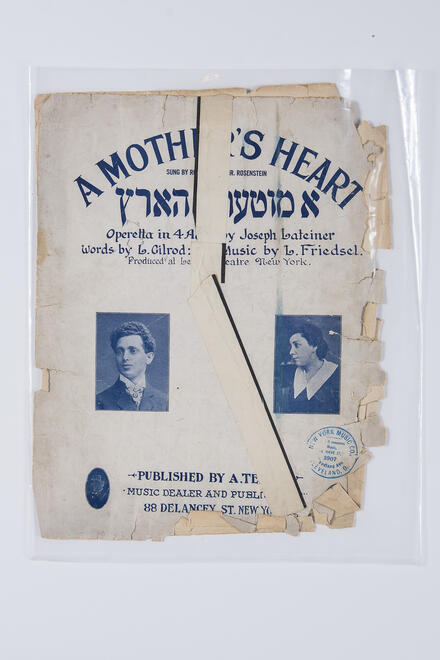 A Mother’s Heart (A muters harts) was the standout hit from the 1913 operetta of that name—a classic work from the golden age of American Yiddish musical theater, its lyrics tore at the raw emotions of immigrant audiences. With conservation measures, this rare music sheet can be made to look almost like new. 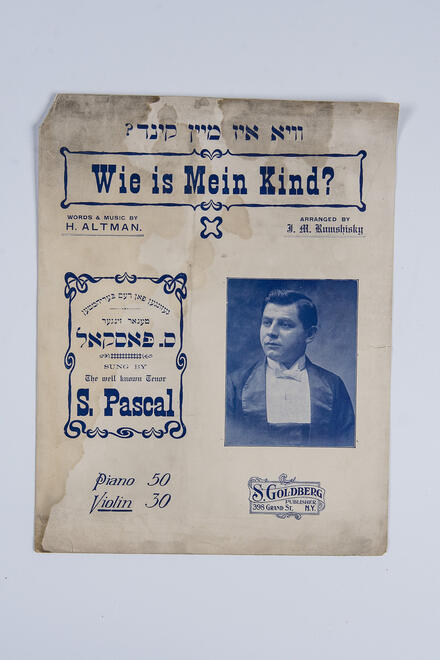 “How (and where) is my child?” was a popular Yiddish hit song from 1910. Discolored by stains and surface dirt, this one-of-a-kind copy is in need of cleaning and a small corner repair. 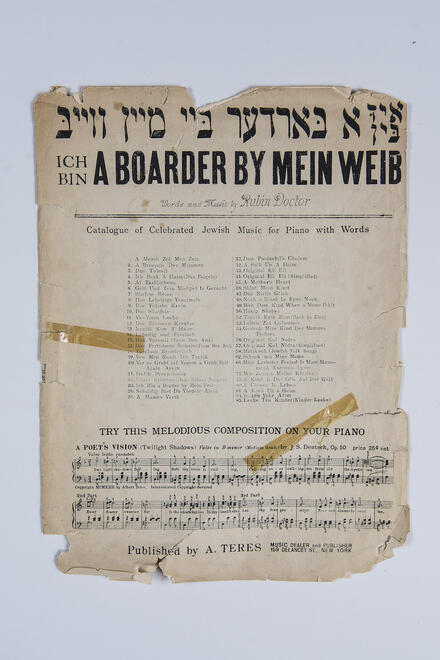 Rubin Doctor was a brilliant writer of novelty hits—the Irving Berlin of Yiddish music hall—and Ikh bin a border bay mayn vayb (I’m A Boarder At My Wife’s) a classic of Yiddish popular culture, sung by dozens of Yiddish comic singers. This early sheet music from the Lower East Side, played until it almost fell apart, is in need of careful restoration to the tears and edges. 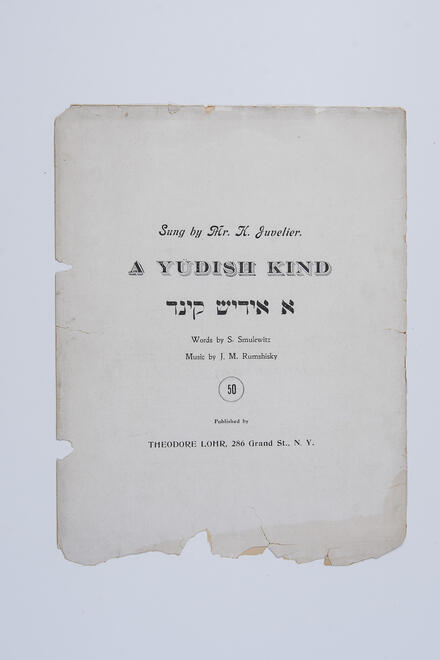 This 1909 music sheet is an important and extremely rare artifact—the lyricist, composer, and singer were some of the biggest names of the early Yiddish stage in the US. Our copy needs repairs to the outer edges to make it suitable for scanning and exhibition use. 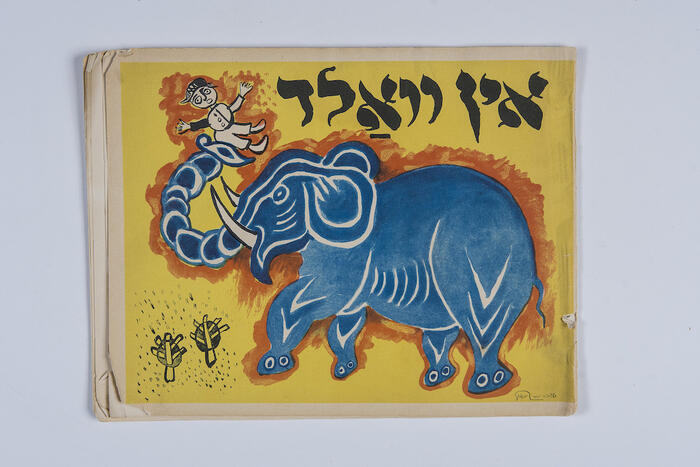 We're fortunate to have one copy of this rare and highly sought-after Yiddish children’s book, In vald (In the Forest), by Soviet Yiddish author Leyb Kvitkowith, with wonderful illustrations by the celebrated painter Issachar Ber Ryback. Our copy badly needs  careful repairs to the fragile page corners and the tear in the spine, before being stored and cushioned in an acid-free archival box.

Classic Works of Literature in Urgent Need of Conservation 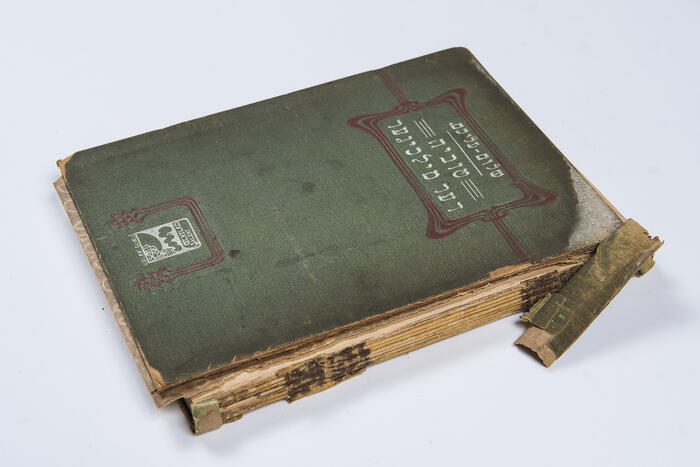 Sholem Aleichem published his Tevye stories over a twenty year period, and this beautiful, battered edition of Tevye der milkhiger (Tevye the Dairyman), circa 1910, from Warsaw is typical of the way early Yiddish readers encountered this beloved character. The real Tevye would stand in front of Sholem Aleichem’s dacha with his horse and cart, weighing out butter and cheese to sell to the writer, who described him as ‘a thousand times more interesting than the story!’ In short order, his literary counterpart became a beloved Yiddish classic, a huge Yiddish stage hit, a bestseller in Chinese and many other languages, and eventually Fiddler on the Roof. This fragile copy is a survivor from the explosion of popular Yiddish publishing in early twentieth century Poland. It’s an essential part of Yiddish publishing history, as well as perhaps the most iconic text in all of Yiddish literature. With careful cleaning, restoration, rebinding, and rehousing in a cushioned box, a skilled conservator can transform this rare book and give it a new lease on life. 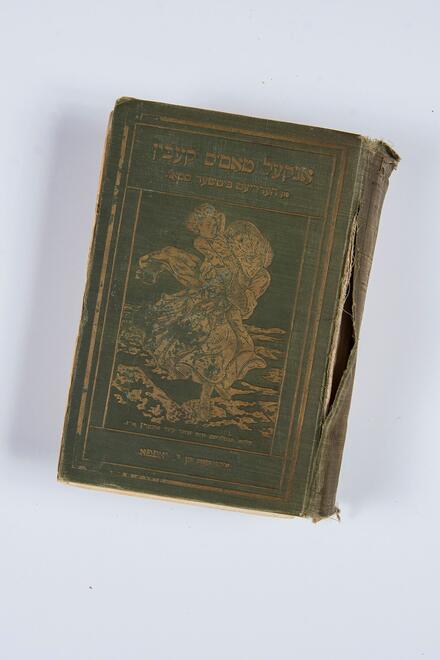 Yiddish-speaking immigrants to Amerike demonstrated an almost insatiable appetite for the classic literature of their new homeland in translation. They could take their pick from Mark Twain, Jack London, Ernest Hemingway, Upton Sinclair, Theodore Dreiser, Walt Whitman, and many more. But it’s likely that the best-selling American novel in Yiddish translation was this one—Uncle Tom’s Cabin (Onkel tom's kebin). Stowe’s antislavery classic was a runaway bestseller, rapidly translated into dozens of languages. The first Yiddish adaptation came out in Russia in 1868, transposing the novel into an entirely Jewish setting. Stage adaptations were popular in the heyday of the American Yiddish theater. But this is the version that most US Yiddish readers encountered: a much more faithful rendering of the novel into Yiddish, issued by the Hebrew Publishing Company in 1911. The worn and tattered cover of this copy shows just how eagerly it was read and shared. We can’t restore the shine of the beautiful gold drawing on the cover. But we can repair the binding and allow many more people to appreciate this landmark text of the Yiddish encounter with America. 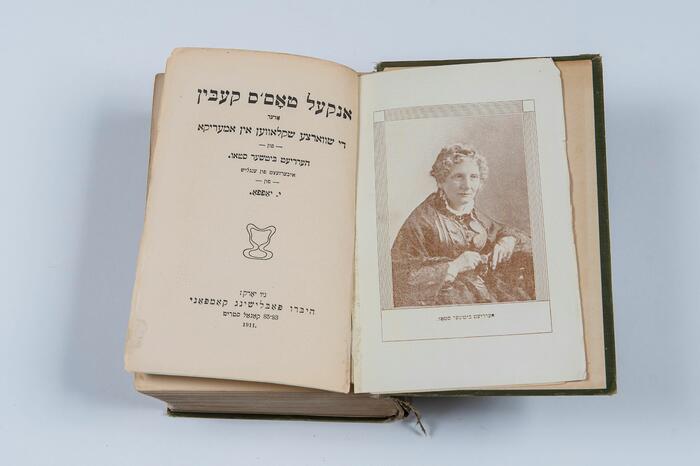 The damaged binding of the title page and Harriet Beecher Stowe photo in the 1911 edition of Onkel tom's kebin (Uncle Tom's Cabin). 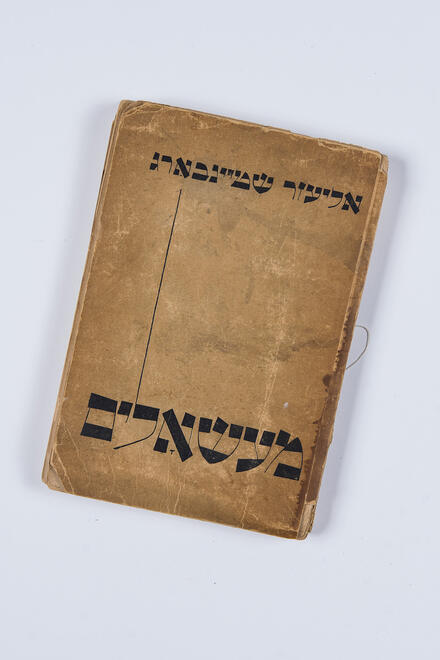 Eliezer Shtaynbarg is one of the greatest of all Yiddish writers, and one of the least known. In part, that’s because his dazzling, virtuoso use of language is so hard to translate. A celebrated writer and educator in his native Czernowitz, he was remembered in a Wexler Oral History interview by Yiddish poet Beyle Schaechter-Gottesman. “We were big fans and admirers of Eliezer Shtaynbarg,” she recalled. “He was a brilliant, talented man, a master of children’s literature, our Peretz, our hero. Sadly, I was at his funeral after he died young of an appendix operation. It was an amazing funeral, the whole city was closed.” This is a rare edition of his fables (Mesholim) from Bucharest, issued in 1935, shortly after his death, featuring cover lettering by Artur Kolnik, a brilliant Czernowitz print-maker. Torn and fragile, this copy bears witness to the remarkable flowering of Yiddish culture in this part of southern Europe in the interwar years. 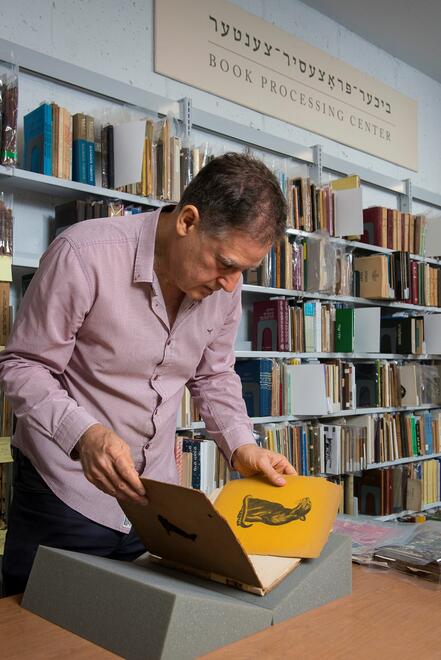 One of the rarest of all Yiddish books, this is a beautiful Soviet Yiddish edition of Rudyard Kipling’s Mowgli (Mougli) stories. The boy raised in the jungle by wolves has fascinated readers all over the world, and Russians were no exception. Lavishly illustrated, this volume includes stunning—but sadly, detached—yellow end papers featuring Bagheera, the black panther who befriends and protects Mowgli. Yiddish-speaking children in the USSR were in safe hands here: the translation is an acclaimed rendering by the master stylist Lamed Shapiro, best known for his shattering pogrom stories; the accompanying verses were translated by the great Yiddish poet Shmuel Halkin. It’s extraordinary to think of this book transporting its young Soviet Jewish readers to a far off land in the late 1930s, just as Stalin’s terror was at its height. We are incredibly fortunate to possess this copy: it’s one of only two that have survived from a very small print run. The only other known example is at the National Library in Israel. It is in urgent need of skilled conservation.

Newspapers, Periodicals, and Serials in Need of Repair 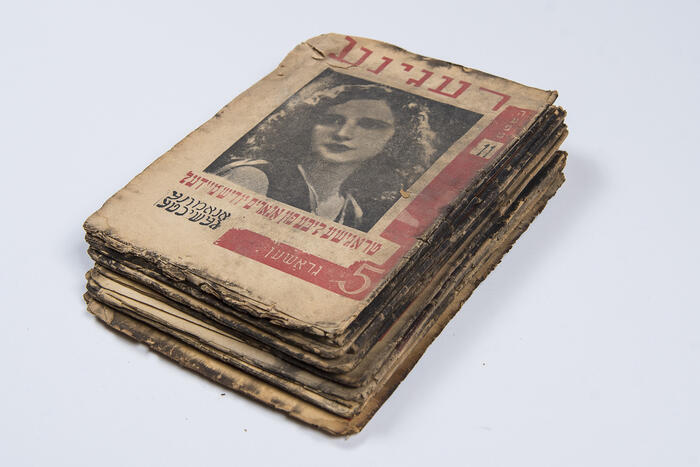 Yiddish pulp fiction boasted a huge array of spies, criminals, orphans, adventurers, soldiers, detectives, inventors, evil-doers, and saviors. But the biggest genre of all was romance. By the 1930s, cities like Warsaw, Lodz, and Bialystok were full of young Jewish workers negotiating modern urban life with all of its problems and freedoms. Regina is one of these—a ‘poor Jewish girl’ with a tragic love life. Exceptionally rare, these surviving booklets from the serialized novel survived a fire before being brought to the US and eventually donated to the Yiddish Book Center. They need urgent conservation work so that the pages can be opened and the pamphlets scanned and digitized. 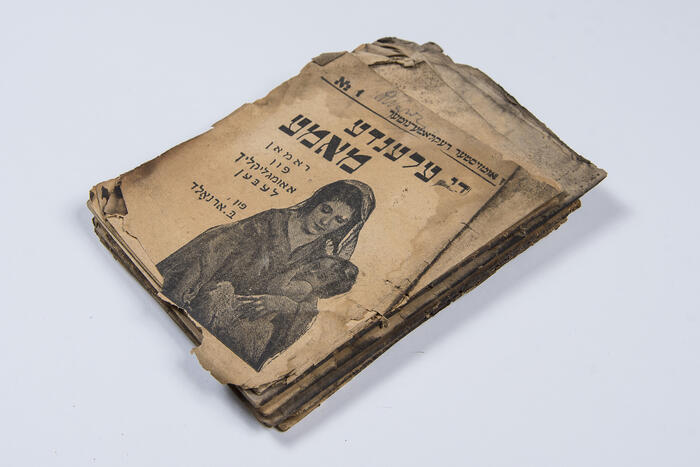 Di elende mame (The Lonely Mother) was another popular novel published in installments in Warsaw in 1937. Elend is one of those tear-jerking Yiddish words pregnant with further meanings—forlorn, sorrowful, tragic, abandoned. If the buyer was in any doubt about what sort of tale they were about to read, the subtitle makes it crystal clear: ‘a novel about a sad life.’ These rare pamphlets came to us from the same place as the Regina booklets, and were singed in the same fire. 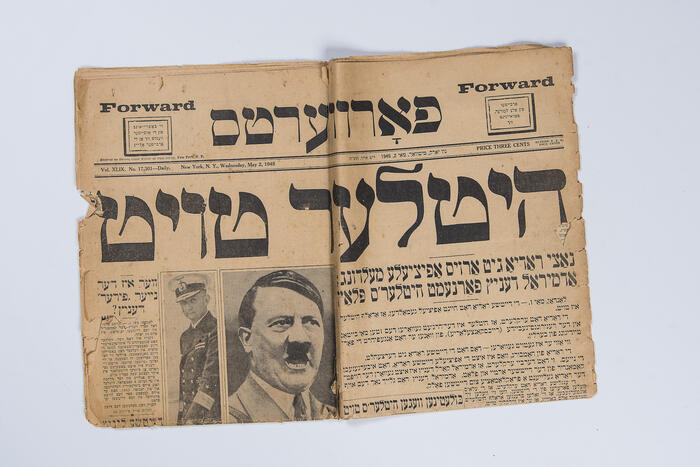 A stark headline from the Forward newspaper of May 2, 1945 proclaims the momentous and long-awaited news: Hitler toyt (Hitler is Dead). Despite its torn and brittle state, this fragile issue is an enormously powerful educational tool. We have used it for many years to show to visiting high school groups, and it is often cited in feedback as one of the most memorable objects on their tour. To prevent it deteriorating further, it now needs to be unfolded, repaired, and encapsulated so that we can continue to show it. 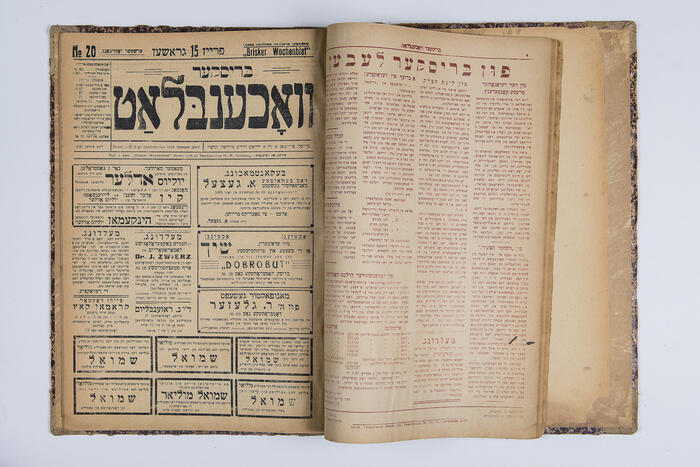 A rare volume of Brisker vokhenblat (Brisk Weekly) from 1926. The paper was one of several Yiddish newspapers serving the Jews of what is today Brest in Belarus, formerly Brest-Litovsk. The city was famed as a center of Jewish scholarship in Lithuania, and later came under the rule of independent Poland. In the interwar period it had a thriving Jewish educational system and approximately forty synagogues and study halls. Yiddish regional newspapers like this are extremely scarce and provide a wealth of information about Polish Jewish—and Yiddish—communal life during its most intense period. 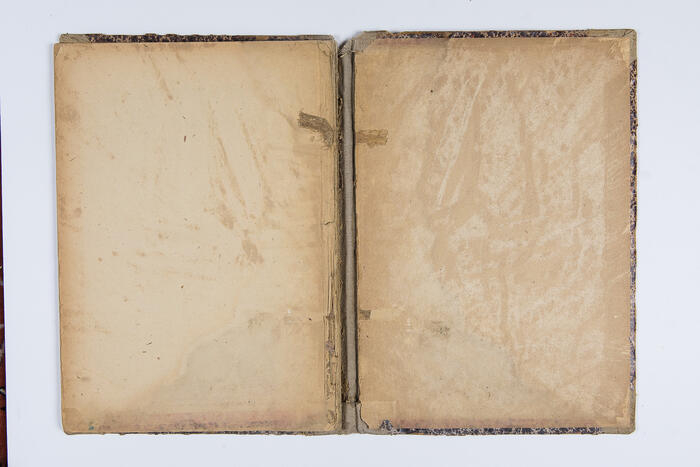 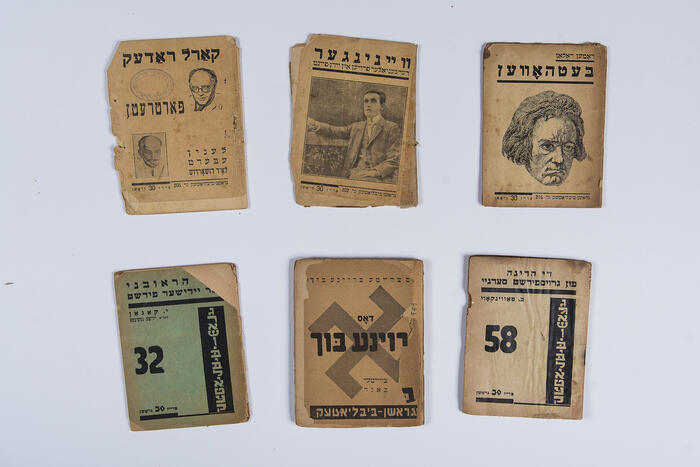 The Groshn bibliotek (Penny Library) series was one of the most ambitious libraries of popular knowledge ever published. Two hundred and seventy-five of these pocket-sized pamphlets appeared in Poland from 1930 to 1937, each consisting of sixty pages. They were cheap, well-written, and enormously popular with subscribers. Despite a print run of around 10,000 for each title, they are extremely scarce today. Most of our copies are in poor condition, having been passed around in families or between friends and colleagues. Shown here are booklets on Beethoven, Soviet writer Karl Radek, and philosopher Otto Weininger. 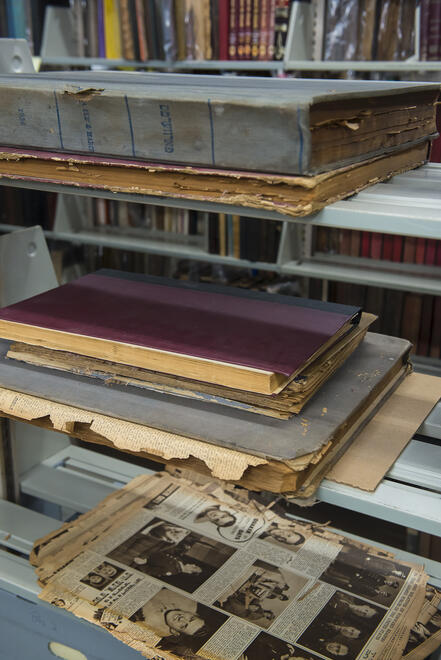 Bound volumes of old Yiddish newspapers in our temperature-controlled vault. We have several dozen such volumes, most of which were donated to the Center from large community libraries. The newspapers come from the US, Canada, South Africa, Poland, England, and elsewhere.  They have not aged well, but it’s vitally important to preserve them. Many world-famous libraries destroyed complete sets of such volumes during the switch to micro-film and microfiche. Today, there is renewed awareness that digital preservation is no substitute for the original object. With newspapers, just as with books, we preserve original copies alongside our digital library.

Make a donation in support of this project and help us transform and preserve these rare and fragile treasures.

To learn more, read David Mazower's letter to our members.