Gregorio Brilovich, retired engineer who grew up in Uruguay and Chile, was interviewed by Christa Whitney on April 14, 2010 at the Yiddish Book Center in Amherst, Massachusetts. Born in Latvia in 1921, Gregorio left with his parents at the age of four. Unable to immigrate to the US, they ended up in Montevideo, Uruguay in 1930. The family eventually owned dairy factories and a store, which they lost when the government took over the dairy industry. Because of the loss of their business, the family moved to Santiago, Chile. Starting life over in Chile was difficult. Both parents worked to eke out a living, and received some help, including getting potatoes from the synagogue. His parents spoke Yiddish, Russian, or Latvian at home. He and his siblings learned Spanish and attended public elementary and high schools. He attended kheyder (traditional Jewish religious school) every Sunday with about twenty other boys and learned to read and write Hebrew and prepared for his bar mitzvah. He recalls the teachr pulling the students' peyes (earlocks). For his bar mitzvah, his mother made honey cakes and his father brought a few bottles of cognac. He acknowledges that it was nothing like the ones today. Gregorio describes Santiago as a good, tightly knit Jewish community and himself as a young rebel. He remembers being punished with friends for hiding in the synagogue attic and was caught when the attic floor collapsed. After technical university he was accepted to the University of California at Berkeley in 1945, but his father would not give him money to attend. Instead, he worked for forty days aboard a freighter to get to the United States, arriving in Pensacola, Florida. A $100 gift from an employer in Santiago paid for his bus across the United States to San Francisco, California to enroll in school in September. Because the military had priority for bus seats, it was a long, slow trip cross-country. He ate hamburgers that cost five cents throughout his journey, arriving in San Francisco with $5. In San Francisco he lived with his uncle, Sam, a former acrobat in Latvia, who made him pay for room and board. Gregorio graduated from Berkeley with an engineering degree. Although he had a 4-E visa, which meant he couldn't work, he received three job offers and accepted the offer from a bus building company in Richmond, Indiana in 1947. He traveled extensively and set up assembly plants for the bus company all over the world. Eventually, he tired of the travel, quit and returned to Chile. In Chile, he ran the machine shops in the Andes for Kennecott, an American mining company and was paid in US dollars, which made him an elite employee who received favored treatment. He recalls the discrimination against Chilean workers in housing, transportation, theater seating, and access to the American club. On a trip to Santiago he met his wife and describes their brief courtship – three months from meeting to marriage. Because his new wife found the lifestyle in the mining town too uncultured and wild, he quit, returned to Santiago, and opened his own machine shop. Knowing that most architects and building engineers in Chile were Jewish, he approached them seeking work, offering that if they didn't like the work they didn't have to pay him. As a result of this offer, he received a lot of work. Although he had wanted to return to the US, for years his wife refused. In 1960, she suddenly acquiesced. They settled initially in San Francisco and ultimately in San Jose. Gregorio ends by talking about his family in Latvia, where life was tough, especially under the Russians. At age fourteen, his mother and a girlfriend baked bread to sell in Russia. Sometimes they got paid in clothing, which they could then sell in Latvia. In Riga his father was a horse trader, but in Uruguay he had no profession and began as a peddler. He sold combs, shoelaces, mirrors, and other items from a box he carried through the streets. 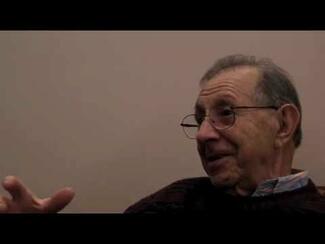