David Shneer, Professor of History and Religious Studies and Director of the Program in Jewish Studies at the University of Colorado at Boulder, was interviewed by Emma Morgenstern on July 10, 2010 at the Yiddish Book Center in Amherst, Massachusetts. Professor Shneer begins the interview discussing his family background and childhood. He describes growing up in a suburb of Los Angeles where he was the only Jewish kid on the block and notes that there was not a lot of Jewish observance or Yiddish in his home. He then goes on to discuss his studies at UC Berkeley where he majored in Russian and Jewish History which led to Yiddish language study in order to access documents for his research. In graduate school, he studied at the YIVO summer program, eventually enabling him to write in Yiddish to his grandmother who responded that his skills had now surpassed her own. He reflects on how the correspondence with his grandmother provided an "overlay of familial nostalgia" for his studies. Reflecting on his experience in teaching Yiddish which began in 1999 while still a graduate student, Professor Shneer elaborates on the intricacies of teaching Yiddish and Jewish culture to individuals with no prior background. He discusses how he now requires a lower division course as a pre-requisite to his Yiddish Culture course at the University of Colorado at Boulder. Professor Shneer moves on to discuss his interest in queer culture, reflecting on his time serving as principal of an LGBTQ synagogue, Congregation Sha'ar Zahav, in San Francisco from 1997 to 2001. He also discusses Queer Jews, his book published in 2002 with co-author Caryn Aviv, which "documents what happens when this group of people tries to claim space in this culture." He also published Torah Que(e)ries, a book of "queer readings of Torah portions." He then goes on to discuss his other scholarship and current projects, including Through Soviet Jewish Eyes: Photography, War, and the Holocaust published in 2011.This work explores the lives and works of two dozen Soviet Jewish World War II military photographers and examines what kinds of photographs they took when they encountered evidence of Nazi genocide on the Eastern Front. His latest project examines Yiddish musical culture's role in the clash between Fascism and Communism through the life and work of Lin Jaldati, a Dutch-Jewish Yiddish-singing cabaret singer, who survived the Holocaust and was the last person to see Anne Frank alive. Shneer describes Jaldati as occupying the "middle space between the Holocaust and state-sponsored Yiddish culture in East Germany." Professor Shneer reflects on his connection to Yiddish and characterizes it as the common thread which ties together all of his interests in twentieth century European, Russian, and Jewish history and culture. He affirms his interest in "changing the angle from which we see things," emphasizing the importance to know "how politics shapes how we understand 20th century Jewish history." Towards the end of the interview he discusses his experience as a part of the Yiddish Book Center's Steiner Summer Yiddish Program as a faculty member and how the program has evolved over the years. He recognizes the value of the many skills learned by the students, even if the program is the end of a student's Yiddish journey. Professor Shneer ends the interview by recalling speaking to the Yiddish Club of Moscow at an event at the Shalom Theater in 1999. Although most members were not fluent in Yiddish, Professor Shneer describes being moved by their request that he address them in Yiddish. He concludes by reflecting on post-Soviet Jewish life in Moscow. 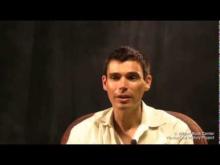 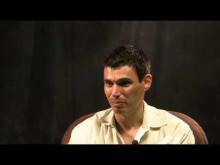 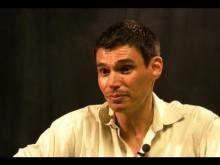 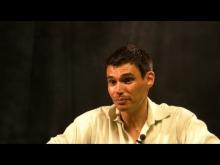