Miriam Isaacs, linguist and professor of Yiddish, was interviewed by Pauline Katz on December 26, 2010 at KlezKamp in the Catskills Mountains of New York State. Dr. Isaacs begins the interview discussing her family background. Her mother was from the shtetl (village) Solotvina, near Siget, Czechoslovakia which is today a part of Ukraine. Her father was from Isterik (in Yiddish), or Ustrzyki Dolne in Polish, in Galicia, Poland. Professor Isaacs explains that she was born in a Displaced Persons camp in Leipheim, Germany. Her family immigrated to Montreal, Canada when she was two years old. She shares many pleasant memories of life in Montreal, the beauty of the city, the freedom she enjoyed because the city felt safe, the rich mix of cultures, and the Yiddish cultural institutions. She then moves on to talk about her family's move to Crown Heights, Brooklyn, New York when she was twelve years old. She contrasts her education in Montreal, which she considered very fine, with the poor and chaotic Brooklyn public school where she was enrolled in middle school. Her academic prospects improved when she went to Erasmus High School. She recounts the conflicts in her family over her future, her mother proposing to marry her off to a Hasid when she was a teenager, her father objecting to the match but doubtful about how useful college could be for a girl. Dr. Isaacs laughs as she tells how she prevailed and studied at Brooklyn College, how fortunate she was that the City University of New York had free tuition because her family could not have afforded to send her to college. She went on to get a PhD from Cornell University in linguistics, and describes her father's transformed feelings, first thinking that too much education might spoil her chances to marry, but later boasting about his daughter's doctoral degree. Dr. Isaacs explains that she always spoke Yiddish with her parents, but never studied it formally although her father had taught her to read. When she was studying linguistics at Cornell, she describes how she began to examine and study Yiddish. Her fellow student used her way of speaking Yiddish as the basis of research he was doing, and she became conscious of how she spoke. Students at the campus Hillel wanted to learn Yiddish, she volunteered to teach, and therefore she learned as she taught the grammar, using the Weinreich College Yiddish. She laughs as she tells an anecdote of a linguist friend recalling her strong Galitzyaner (Galician) accent as she attempted to teach Standard Yiddish. After graduate school, working as a lobbyist in Albany, New York and Washington, DC, Dr. Isaacs talks about finding her way back to teaching. She describes her experience teaching ESL as "very rewarding" and also discusses her time at the University of Maryland, where she lectured on her research into Yiddish among the Haredi in Israel. She taught Yiddish language for sixteen years, varying her teaching techniques to suit the changing student body. She explains that she believes that to teach language is to teach culture. For her, Yiddish is embedded in mentshlekhkeyt (humanity), and the emotion and cadence of a particular culture that cannot fully be grasped in translation. She then reflects on her teaching experiences, comparing the experience of teaching Yiddish in summer programs in Prague, Czech Republic and in Vilnius, Lithuania, where she found rich, immersive experiences with interesting fellow teachers and students. Towards the end of the interview, Dr. Isaacs shares a final anecdote about meeting the Yiddish poet Avrom Sutzkever at a conference in Oxford, England in 1983. She recalls that when Sutzkever heard her speaking her dialect of Yiddish, he expressed pleasure at hearing real Yiddish, not Yiddish "from a book." That convinced Dr. Isaacs that she could aspire to teach. 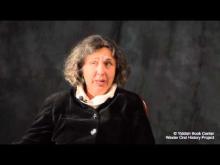 At Home Yiddish, in School English, on the Streets French