Daniel Kahn, Berlin-based Yiddish singer and songwriter, was interviewed by Christa Whitney on August 24, 2011 at KlezKanada in the Laurentian Mountains of Canada. Daniel grew up in the suburbs of Detroit, Michigan. Daniel's mother was born in Detroit, Michigan, and his father was born in Akron, Ohio. Daniel's four grandparents lived in many different hubs across the nation including the Lower East Side, Wisconsin, and Ohio. Though a self-proclaimed, American, Daniel reflects on his mother's family's Galician past, and how his father's family left Austria-Hungary for England before immigrating to the United States. Growing up, Daniel went to Temple Israel in West Bloomfield, Michigan where he was Bar Mitzvahed, celebrated holidays, and sang in choirs. By the age of 12, Daniel became involved in acting, and worked at the Jewish Ensemble Theatre in Detroit, Michigan. Though Daniel felt increasingly alienated from the Jewish suburban mentality, his work in the theatre bolstered his culturally Jewish identity. The political atmosphere in Detroit greatly shaped Daniel's worldview at a very young age. Daniel retells his consciousness of racism and union work throughout the interview, detailing his interest in folk music, political protest songs, and African American cultural production. His interest in race politics developed as he situated himself, a privileged white male, into his work with class politics. These notions developed in Daniel's college theatre work that became heavily influenced by Bertolt Brecht, Augusto Boal, and Paulo Freire. When Daniel was a teenager, he went to New Orleans. On this trip he heard the New Orleans Klezmer Allstars. Though he had some knowledge of Yiddish culture, it was this moment that peaked Daniel's interest in Klezmer. When Daniel moved to New Orleans in 2001, he became more involved with Klezmer and Yiddish. By 2004, Daniel was singing a lot of Yiddish and was invited to Klezkanada. During the middle of the interview, Daniel goes into detail about what attracted him to Yiddish as a singer/songwriter. He describes the moment he heard Michael Albrecht sing Yiddish on the Brave Old World Songs of Lodz Ghetto album. The sound captured him, and it was this experience that influenced his decision to continue working in Yiddish. Yiddish was no longer a language of nostalgia, but a language ready for recontexualization and use for a contemporary audience. Daniel eventually travelled to Berlin and the Krakow Jewish Festival. This move allowed Daniel to begin work with Psoy Kordenko; a collaborative relationship he is deeply invested in today. Daniel traveled to New York in 2008 and completed the YIVO program. Though deeply interested in the use of Yiddish, Daniel is clear that his use of Yiddish varies as he is more interested in storytelling and the multiethnic conversation his music is involved in. The end of the interview focuses on Daniel's insights into Yiddish culture, Yiddish cultural revival, and the way Yiddish has been transmitted and his work in this process. The interview ends with reflections on political activism and the role of the musician.

Daniel Kahn was born in Detroit, Michigan in 1978. 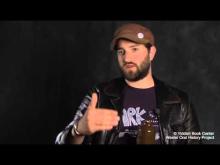 A Smuggler of Yiddish 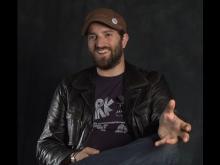