Clare Burson, former Yiddish Book Center intern and musician, was interviewed by Pauline Katz on July 10, 2011 at the Yiddish Book Center in Amherst, Massachusetts. The interview focuses on Clare's Jewish upbringing in Tennessee, education, international travel, family history and traditions, and her album "Silver and Ash." Clare begins by discussing her family's geographic origins. Her paternal grandparents were born in Memphis, Tennessee. Her paternal grandfather's parents were from Kyiv, Ukraine, and her paternal grandmother's parents came from Ponevezh and Posvol, Lithuania. Her maternal grandparents were both from Liepzig, Germany and arrived in the United States between 1937 and 1938. Clare lived in Memphis until she was thirteen and from there lived in many places, including Nashville, Providence, Germany, and Boston. She currently resides in Brooklyn. Clare recalls how the family would have Shabbos dinner at her paternal grandparent's house in Tennessee that consisted of chicken noodle soup, fried chicken or brisket, and a rice kugel. Her grandfather would recite Hebrew prayers in his southern twang. The family belonged to a conservative synagogue until they transitioned to a reform congregation after her Israeli Bat Mitzvah and the passing of her grandfather. She describes the noticeable difference between the Jewish observances in the South and the Northeast. In Clare's experience, "Conservative" in the South is "much more Orthodox" in the Northeast. Clare discusses her exploration of Jewish identity which began when she started practicing Jewish music with her violin teacher. Clare reflects on her time at the Yiddish Book Center as a summer intern and recognizes that her English speaking household had Yiddish influences from her maternal grandmother even though her grandmother was raised to assimilate in Germany and become "a quintessential German girl." Clare talks about her time at Brown University where she studied German and German history. She also studied Klezmer and Yiddishkeit (Jewish culture and history) for a year abroad in Hamburg, Frankfurt, Berlin, and Munich. She also discusses her time at KlezKamp, an annual Klezmer and Yiddish cultural festival held in New York, and her work at the Yiddish Book Center where she began songwriting. Reflecting on her time in Amherst, Clare notes, "I found a piece of myself around fairly likeminded people who were exploring the same sorts of things." Clare applied for a Fulbright scholarship, travelled back to Cologne, and understood that she wanted to explore her identity through music. She was accepted to the first round of The Six Points Fellowship for Jewish artists to "find out what the relationship was between my Jewish culture and identity, and the music I was creating." She then discusses the origins of her album, "Silver and Ash." It synthesized from a trunk that contained "an object, the size of my hand, crumpled in aluminum foil… that look(ed) like a pumice stone," an artifact she was given by her paternal grandmother when she visited during Passover. She recalls a story her grandmother told her about this cheese wedge traveling in her great-grandfather's possession when he was fourteen. It travelled from 1893 from the shtetl (village) in Lithuania, to South Africa, through the Boer Wars where he fought with the Dutch, to Leeds, England, and on to its final resting place in Memphis, Tennessee. The majority of her songs were influenced by her grandmother's life prior to her arrival in the United States and Clare's relationship with her. She explains that she is still examining Jewish identity and Yiddish culture in her work with artist peers, but is not keeping up with her Yiddish studies. Clare sees many people her age looking into the culture because "there is something more compelling about the stories that took place involving characters…that died long before you were around in places that you'll never know and in eras that you'll never know." At the time of the interview, she is pregnant with her first child and intends on raising the child in a Jewish household and making Yiddish, folklore tunes such as "Di Mashke (Whiskey)" and fried chicken Shabbos dinners a tradition for their family. She ends her interview with advice for future generations: "Tell stories! Ask questions! Do what you have to do to figure out who you are."

Clare Burson was born in Memphis, Tennessee in 1975. 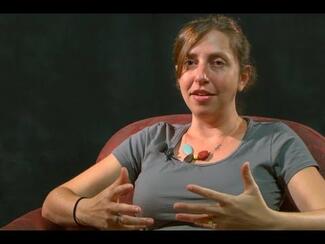 Connecting To The Past 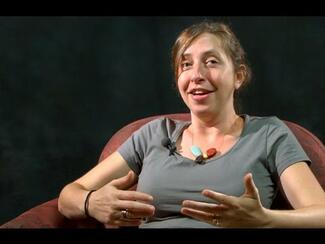 "Papa's Cheese": The Jewish Immigration Story of a 100-year-old Wedge of Cheese 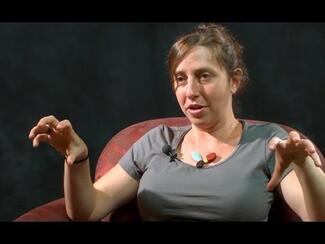