Shimon Alperovitch, z"l, co-president of the Lithuanian Jewish Community, was interviewed by Christa Whitney on July 31, 2012 in Vilnius, Lithuania. This interview is entirely in Yiddish. Shimon Alperovitch was born in Vilna (Vilnius) in 1928, during the Polish occupation of Lita. His mother came from a prominent Jewish family in Lita (Lithuania) called Strashun. Some of Shimon's ancestors were renowned rabbis, mentioned in the German Jewish encyclopedia, Brockhaus. There is a library named after the Strashun family in Vilna. His father's family, the Alperovitches, came from a shtetl (village) near Vilna, called Kurenets. Shimon can trace his family back to 1790. Shimon says his father was unhappy under Polish rule and took his family to Kovno. Shimon lived there until 1941. He went to a Yiddish-language Sholem Aleychem school. It was a secular, Leftist environment. Shimon remembers that his teachers as being very good. The school director was Levin, and the teachers he mentions were Rosenthal, Koliantshik and Tsorfas. At home Shimon spoke Polish, Russian and Yiddish with his parents, who had studied in Russian schools. His father was an atheist, and they did not lead a religious life, despite the family yiches (heritage). His father worked as an engineer. Shimon recalls that Kovno had quite a large Jewish population, a Jewish quarter with Jewish shops, a Jewish intelligentsia, and four Jewish schools. Shimon speaks about his family, who were annihilated in the Holocaust by Germans and Lithuanian nationalists. His aunts and grandparents were shot in Ponar. Shimon sees this as the greatest tragedy of Lita's Jews: that there was not one family that did not suffer a loss. Shimon recalls his grandparents, especially the Strashuns, with whom he was close. His grandfather, Michael Strashun, was a gabai (synagogue administrator), religious, and knew several languages. Shimon learned to play chess from him. His grandmother, Bertha Shilevitch, lived with them until she died in 1940. Shimon his family's fleeing Kovno when Germany invaded. They boarded a train (echelon) to Vilna, but Vilna was under bombardment: they went on to Penza, 1600 kilometers east, in Russia. After the war they returned to Vilna, which was devastated, most of its Jews having perished. But others came that had survived in the Soviet Union. Shimon states that his Jewish identity was never in question, and that he was always proud to be a Jew. At home they spoke Russian during Soviet times, but Jewish themes were often topics of conversation. Shimon emphasizes that in Lita, as opposed to other Soviet republics, Jews often spoke Yiddish. Hebrew was forbidden, and cause for arrest. Shimon also explains why he didn't immigrate to Israel: he feels that it is important to maintain the Jewish community in Vilna. In Israel, he feels, he would just be a pensioner without any real occupation. But he emphasizes that he has very good relations with the Israeli embassy in Vilna, and many friends in Israel with whom he maintains a friendship. The local community also supports Israel. Continuing to describe Vilna during Soviet times, Shimon lists the Jewish cultural entities that were allowed to exist. There were no Jewish schools, but there was a Yiddish folk theater, a Yiddish choir, and a synagogue which held services on Yom Kippur and other holidays. Shimon enumerates the activities of the kehila (community) today: their main aim is to preserve Yiddishkeit (Jewish life). They organize camps for children, and Jewish concerts- there is an ensemble called Feierlach which performs in Yiddish. They attempted to organize three political and cultural congresses of former Litvak performers. There is a Jewish school and kindergarten, financed by the government. Another important activity of the community is fighting anti-Semitic propaganda in the media. Caring for the elderly is one of the main functions of the community, and they are greatly aided by the American Jewish Joint Distribution Committee in this venture. There are also many clubs which organize social activities for the elderly Jews living in Vilna. On the question of Yiddish in Vilna today, Shimon elaborates on the Yiddish institute which brings foreigners to study Yiddish; Yiddish courses which are given by local teachers; films on local Jewish history are shown. Shimon discusses young people in Vilna today: one of the directors of the community speaks Yiddish with his children and parents, and there is a young woman who became enthusiastic after participating in a program in Israel. In general Shimon is optimistic about the survival of Jewish life in Lita. Shimon wants to pass on to youth a positive view of their Jewish identity, and the desire to learn more about Jewish literature and culture. He likes to read works by Litvak writers- Sholem Aleichem, Grade, and Sutzkever (whom he knew personally). Shimon hopes the Yiddish language will survive into the future.

Shimon Alperovitch was born in Vilna, Lithuania in 1928. 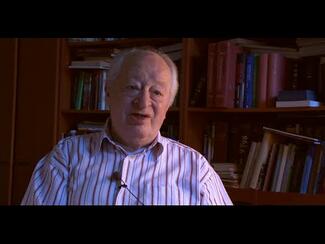 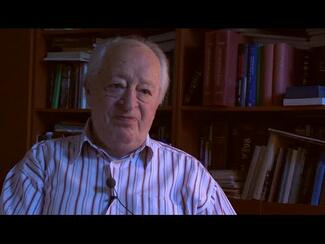 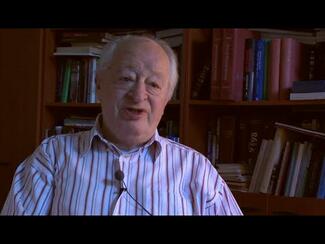 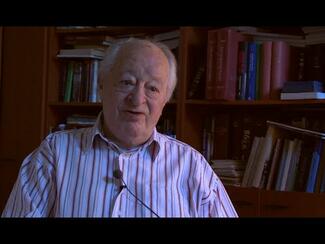