With a Translator Profile by Ezra Glinter

In 1905, Klara Klebanova, a young woman from a middle-class Jewish home near Chernigov, left her job as a teacher to become a revolutionary. Finding Russia’s Social Democrats not radical enough for her liking, she joined the “Maximalist” offshoot of the Socialist Revolutionary Party, an extreme group known for its use of violence.

Over the next ten years Klebanova conducted propaganda, smuggled dynamite under her clothing from Finland, and ﻿helped with the “expropriation” of capitalist resources from banks, which made the group notorious internationally. Eventually she was arrested and spent two years in a women’s prison before leaving Russia for Paris. In 1914 she and her husband, another Maximalist leader named Lipa Katz, moved to Boston, where, in 1922, she published her memoirs in the Forverts newspaper under the title Di blutige teg, or The Bloody Days. When Klebanova died, in 1977, she still regarded her youthful radicalism as the highpoint of her life.

The better part of a century later, another girl, Caraid O’Brien, was growing up in Galway, on the west coast of Ireland. As a child she was taught to revere her country’s nationalist leaders, including those who used violence to achieve their ends. But it wasn’t until later in life, after moving to the United States and becoming an actor, writer, and Yiddish translator, that she discovered a parallel in the story of Klebanova’s militant youth, which she recently completed translating.

After discovering Isaac Bashevis Singer in a high school English class, [O’Brien] began reading all the Yiddish literature in translation she could ﻿get her hands on, including books by I. J. Singer and Chaim Grade. When she went to college she continued to pursue that interest, designing her own major in Yiddish literature at Boston University, taking a year abroad at the Hebrew University in Jerusalem, and becoming one of the first interns at the Yiddish Book Center. Since then she has gone on to a multifaceted career as a writer and performer, including acting in and translating several plays by Sholem Asch. This past year she was a Translation Fellow at the Yiddish Book Center, working on a quartet of plays by Asch set in and around the First World War.

Still, translating Klebanova has had a special effect on her. Passages about Klebanova’s time in prison, she says, read like a nearly-twentieth-century version of Orange Is the New Black, a TV show about life inside a women’s prison. “What makes the story great is the incredible passion and drive of its writer,” O’Brien said. “She really thought of this time of her life, when she was willing to risk everything for her political beliefs, as the greatest time of her life.”

Ezra Glinter is the critic-at-large for the Forward and editor of Have I Got a Story for You: More Than a Century of Fiction from the Forward. His writing has appeared in The New Republic, The Paris Review Daily, Bookforum, Walrus Magazine, and Pakn Treger.

Until her final years, Klara Klebanova considered her youthful radicalism to be the most exciting and meaningful part of her life. After joining the Maximalist party in Russia in the aftermath of the Revolution of 1905, she spent ten years conducting propaganda, smuggling dynamite, and “expropriating” capitalist resources from banks. When she moved to Boston with her husband in 1914 she began writing her memoir. It was published in the Forverts in the 1920s and recounts the details of that extraordinary time.

The Author and Another Revolutionary Carry Dynamite to St. Petersburg

Comrade Lukich and I decided that we should go and get the dynamite and bring it to St. Petersburg. I sewed the ﬂat sticks into some fabric, from which I made a petticoat and a blouse. When I dressed in these clothes and looked at myself, I saw a two-hundred pound merchant! Lukich put on a belt and a vest ﬁlled with dynamite. Together we looked like a well-fed married couple. We occupied a second-class carriage on the train, wearing our enormous merchant coats and wedding rings in order to pass as a young merchant couple returning home from a honeymoon in Finland. Noticing my ﬁgure, thick from the dynamite, people could easily have taken me for a pregnant young wife. Our travel bags were ﬁlled with all the things that were absolutely essential for a young couple, including perfume, powder, and silk undergarments. In short: we traveled!

The dynamite emitted such a foul odor that I got a terrible headache. Lukich took off his belt and his vest, laid them down at the foot of the upper berth, and went to sleep. I could not so easily take off my dynamite-laden clothes and so I lay down fully dressed on the lower berth. To keep the odor of the dynamite from invading the entire carriage, we sprayed a mixture of eau de cologne and alcohol that we had brought with us for this purpose. Nevertheless, my headache became unbearable. Lukich meanwhile dawdled on the upper berth, descending occasionally to rub me on the forehead with alcohol while mumbling: “Oh, the wives!” In spite of the eau de cologne with alcohol, there was a terrible stench in the compartment. We were afraid the police would examine our things at the border ﻿and ﬁnd the explosives. It was the beginning of winter and the carriage windows were ﬁrmly shut. Then Lukich noticed a small, ﬁxed window high up. He broke it with his boot to let in a current of fresh air.

In spite of the eau de cologne with alcohol, there was a terrible stench in the compartment.

Finally we arrived in Beloostrov, on the Russian border. We left our bags in the carriage and went out to the train station in order to dodge the police who were boarding the train for inspection. Because of my headache I could barely stand up, but Lukich carefully put his arm around me, worried, looking lovingly into my eyes, so that he could pass for a devoted young husband accompanying his fragile, pregnant young wife. Surely even the most experienced spies would have had no suspicion that we were carrying between us some forty pounds of explosives! We drank some black coffee at the train station and returned to our carriage after the police had ﬁnished looking through the railway cars. It worked perfectly! We felt that the most dangerous part for us, the border crossing, had been accomplished as planned. Now we were very hopeful that we could successfully transport the dynamite without incident.

A Spy on the Train

I went out of the compartment and walked toward the train door. Next to an opposite compartment door was a very suspicious-looking person. I felt ﻿at once that he was a spy. We revolutionaries recognized spies “by their smell” and we were very rarely wrong. They had eyes that were somewhat suspicious, mousey, searching. Even if they disguised themselves, we could spot them from their stare and their silhouette. I told Lukich about my suspicion. He looked at the man by the compartment and had the same opinion. My heart broke: now we knew for sure that the spy would expose us in St. Petersburg and we would be arrested. We knew what was waiting for us if we were found with the dynamite. What’s more, if the authorities realized we were part of the Maximalist Fighting Brigade, a death sentence was inevitable.

The Author and Her Colleague Make a Suicide Pact

Lukich and I sat together on the train bench and wondered what to do. “Don’t worry,” said Lukich, “I won’t surrender to them alive.” Then, taking a revolver out his pocket, he said: “I will shoot them ﬁrst and then myself. That will set off the dynamite and they will die together with me.”

“Well then what will I do?” I asked him. “You know what would happen to me if I fell into their hands. As a woman, my situation is worse than yours. Give me the revolver, Lukich!” I was an expert shot and had my own revolver, which I almost always carried. But I hadn’t taken it with me on the trip to Finland.

“You know what,” Lukich said to me calmly. “If the police come at us at the St. Petersburg station, I will shoot you and then me. We will not surrender alive.” “But remember Lukich, shoot me ﬁrst!” And so it was decided. The closer we came to St. Petersburg, the more anxious we became. We were certain that the spy was still trailing us. He stood by the door opposite our compartment all the time and looked at everything in our direction.

Natasha Klimova [1]was also on our train from Helsinki to St. Petersburg, but in a different compartment. After some time she came in to tell us that she had noticed a spy by our compartment. Natasha was a wonderful person. She knew how ﻿to control herself even in moments of extreme danger. At this tense moment she spoke with complete calm about what was waiting for all three of us. Even though she was not carrying dynamite, she had the same chance of being arrested as we did. And she was Natasha, who had bought three ofﬁcer’s uniforms for the comrades who threw the bombs at Stolypin. The secret police knew this and had been looking for Natasha for a long time.

...she came in to tell us that she had noticed a spy by our compartment.

She Gets Even with Her Colleague

We arrived at the St. Petersburg station. Lukich took me under the arm and with spirited attention did not betray our misgivings. We were certain that at any second the police would come and surround us. Lukich did not take his other hand out of his pocket where he had the revolver. Natasha went ﬁrst, pretending not to know us. What happened? No one bothered us at all. It was as if no one noticed us. Had it only seemed that a spy was watching us on the train? We took seats in a coach and traveled to one of our lodgings.

Poor Lukich! Finally the terrible stench of the dynamite started to affect him. He could barely handle the pain of his headache. I empathized with him, but I couldn’t resist a touch of revenge. He had joked about “the wives” when I suffered from the same headache on the train, so now I grumbled, “Oh, the husbands!”

﻿[1] Natasha Klimova was a prominent revolutionary. She had been involved in an unsuccessful attempt to assassinate Russian Prime Minister Pyotr Stolypin by bombing his country villa.

Caraid O'Brien chats with us about the launch of the Yiddish Book Center's new radiocast series, "The Last Maximalist." 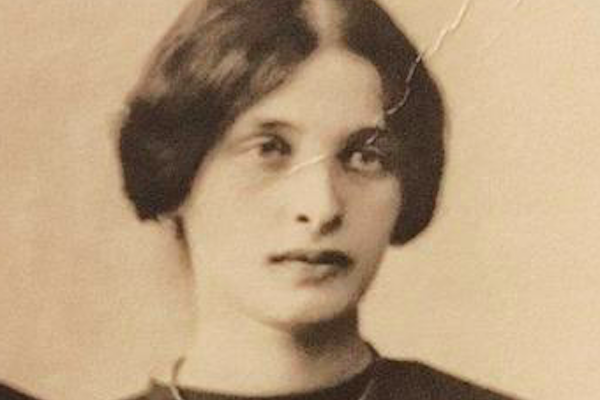 A radiocast of Klara Klebanova's memoir, translated and voiced by Caraid O' Brien

Caraid O'Brien joined us in the studio this week to discuss her career as a writer, Yiddish translator, and performer since learning Yiddish as a...