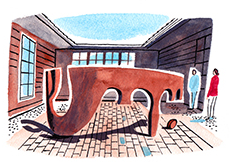 The Center is open to visitors.

Plan your visit and view our COVID protocol.

Resources for Before and After Your Visit

We look forward to welcoming you and your students to the Yiddish Book Center. Here are some resources to help contextualize the content and themes you’ll encounter during your field trip.

Jew: a member of the people whose traditional religion is Judaism and who trace their origins back through the ancient Hebrew people of Israel to Abraham. Today, many people who do not practice traditional religious Judaism still consider themselves Jewish and connect to their heritage through things like languages, literature, and celebrations. This is sometimes referred to as “cultural Judaism.”

Ashkenazi Jews: a Jewish diaspora population that became distinct as a community more than a thousand years ago. They settled and established communities in Central and Eastern Europe.

Judaism: the religion of the Jewish people, based on belief in one God. The primary text is the Torah (also known as the Five Books of Moses or the Pentateuch), which is part of the Tanakh, or Hebrew Bible (known in Christianity as the Old Testament).

Yiddish: a Germanic language spoken by Ashkenazi Jews, originally in Central Europe, later mostly in Eastern Europe, and eventually all over the world by the descendants of these Jews. Yiddish contains elements from Hebrew, Aramaic, and Slavic and Romance languages and is written in the Hebrew alphabet.

Materials for After Your Visit to the Yiddish Book Center

While we covered a lot of ground together during your visit, it was only an introduction to the world of Eastern European Jewry and Yiddish. Here are some resources to help you continue the conversation in your classroom: