The prolific Yiddish writer Solomon Simon was born Shlomo Simonovich in a shtetl in what is now Belarus. At 13, he went to his first of several yeshivas in Poland. His studies were interrupted by the threat of the mandatory conscription into the Russian army, which he avoided by immigrating to the United States.

Later in life, he came to regret the wholesale rejection of religion shared by some of his generation of Yiddishists. Observing the outcome of his children’s secular Yiddish education, he reconsidered his understanding of an American-Yiddish culture and decided that simply studying Jewish history, culture, and the religious texts were a necessary but insufficient foundation and argued for more ritual practice and a renewal of Halakah (way of life guided by traditional Jewish laws), in which Judaism would infuse daily life. In the last twenty-five years of his life, he led an adult Talmud and scripture group, which explored Jewish scholarship and theology.

As part of the Yiddish Book Center’s Wexler Oral History Project, many of Solomon Simon’s descendants recalled their zeyde (grandfather) in their filmed oral history interviews:

To see more edited selections from the oral history interviews recorded with Solomon Simon's descendants, check out the playlist on our YouTube channel.

Over the course of his life, Solomon Simon published more than thirty books. This annotated bibliography of Solomon Simon’s works is arranged by theme and was prepared by his grandson David Forman.

The first books Simon published, and the best-known ones, were children’s books. Three of these early books were based on traditional Jewish folklore. Shmerl nar (The Wandering Beggar) is about Simple Shmerl, a simpleton with a good heart who makes miraculous things happen, and Di heldn fun khelm (The Wise Men of Helm and Their Merry Tales) is about the proverbial city of fools. The hero of Dos kluge shnayderl (soon to appear in English translation as The Clever Little Tailor) is like a Jewish “Jack the Giant Killer,” a small man who lives by his wits, defeats stronger opponents, and brings justice to the Jews.

Another early story book for children, Roberts ventures (Robert’s Adventures), is unusual for being set in America. A talented boy comes of age in the world of tenements and confronts the deadly disparities between rich and poor. Kinder Yorn fun Yidishe Shrayber (Childhood Years of Yiddish Writers), in two volumes, contains vignettes from the childhood years of Yiddish writers. Volume one, published in 1939, describes the childhoods of ten writers, and volume two, published in 1945, describes nine more.

Later, Simon returned to the theme of folk stories, publishing Khakhomim, akshonim un naronim (an equivalent English title might be “Wise Men, Fools, and Stubborn Mules”). Versions of some of those stories made their way into the English-only volume More Wise Men of Helm and Their Merry Tales.

Simon was deeply involved in the secular Yiddish education movement in general, and with the Sholem Aleichem Folk Shules in particular. Almost uniquely for his era, he argued for more Jewish religious content in those secular Yiddish schools. Accordingly, he wrote and published Khumesh far kinder (Bible Stories for Children), an abridgement of the Five Books of Moses, based in part on Yehoash’s famous Yiddish translation of the Torah. Later, he published Yehoshua un shoftim (Joshua and the Judges). When he saw the writing on the wall for American Jewish education in the Yiddish language, he worked (along with collaborators) to produce English pedagogical material under the title The Rabbi’s Bible. This consisted of three volumes and associated teachers’ aids, bringing in the major Talmudic commentaries on the texts.

He also wrote two volumes about the prophets for adults: In di teg fun di neviim (In the Days of the Prophets) and In di teg fun di ershte neviim (In the Days of the Early Prophets). These books, while relying largely on the original source texts, abridged and reorganized those texts to be more narratively coherent biographies of the prophets, adding material from both religious commentaries and the secular biblical scholarship of his day.

The two published volumes of his autobiography, Vortslen (Roots) and Tsvaygn (Branches), were critically acclaimed and translated into English as My Jewish Roots and In the Thicket, respectively. The first volume focuses on the author’s early illness, the discovery of his talent for learning, his family life, and the life of his shtetl, associated with the railroad town Kalinkovitch in what is now Belarus. Simon does not gloss over the poverty his family experienced, nor the tension this caused between his parents, but he also paints an idealistic portrait of the Jewish community and how its ethical foundations were put into practice in daily life. The second volume mostly contains a description of Simon’s yeshiva education during a period of intellectual and political ferment. Reluctant to abandon the beauty he sees in the source texts, but unable to believe in the God of Moses as he is presented by the tradition, the teenage rabbinical student aims to strive for a synthesis of religious and modern life. A planned third volume was never written.

Simon produced two volumes of essays, Tokh-yiddishkayt (Substantive Jewishness) and Emune fun a dor (The Faith of a Generation), whose topics ranged from theology and commentary on the major Jewish sources, to contemporary literary criticism, to social and political commentary. Simon challenged his readers, urging them, for example, to consider more deeply the implications of Zionism for continuity of Jewish life in the diaspora, the need for secular Yiddishists to create enduring institutions, and more. Simon’s book Af eygene drokhim (On My Own Path) is a kind of spiritual confessional memoir, best read in the context of both his biography and the issues of his day as illuminated by his two volumes of essays. Simon wrestles with himself over his own beliefs and practices, his doubts personified as external voices.

Shloyme Simon had a brother in Israel, Binyomin, with whom he corresponded regularly for his whole life. He planned an extended visit in the mid-1940s, but his daughter got sick and the trip had to be postponed. In the meantime, he wrote Yidn tsvishn felker (Jews Among Other Peoples). In this 1948 book, he views the history of the Jewish stance toward state power and argues that Zionism represents a fundamental break with traditional Jewish values. Furthermore, he claims that the nature of Jewish life in the diaspora will also necessarily undergo a drastic change with the establishment of a Jewish state.

In 1949 Simon finally traveled to Israel for the first time. He went with his wife and younger daughter, Miriam, and stayed for three months. The book that resulted from this trip was called Medines yisroyl un erets yisroyl (The Country of Israel and the Land of Israel). Simon spoke with refugees in an immigrant transit camp: soldiers, schoolchildren, kibbutzniks, bus drivers, and ordinary Jews of every kind. His sharp eye for detail and novelistic storytelling garnered positive reviews.

Two of Simon’s books do not easily fit into these categories. Amolike yidn (Jews of Long Ago) is a collection of folk stories with moral themes, but it is not specifically targeted to children. The book begins with stories from indefinitely long ago and then transitions into legends from the Middle Ages. As the book progresses, the tales get more specific and more recent: stories about known historical figures and finally people Simon knew, including his Gemara teacher and members of his own family. Kluge Hent (Clever Hands) is a novel told in the tone of a folk story.

Simon published numerous articles in magazines, journals, and newspapers that were not included in his books. He also published the pamphlets Mayses fun agode (Legends from the Talmud) (in collaboration with Chaim Shoys) and Der goyrl fun unzere yidishistishe shuln (The Fate of Our Yiddishist Schools). The former was a set of Talmudic stories for children, and the latter an argument describing the problems with secular Yiddish education in America as Simon saw them, with suggestions for a change in course. A large portion of that pamphlet has been published online through In Geveb: A Journal of Yiddish Studies. 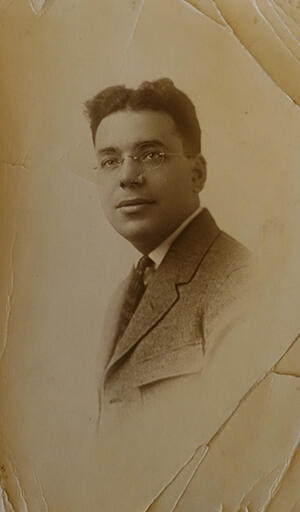 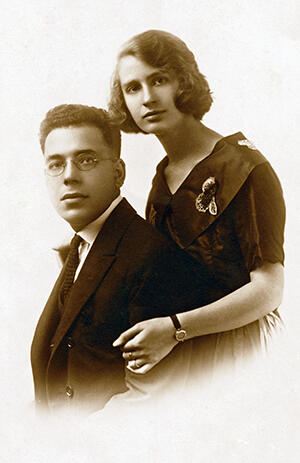 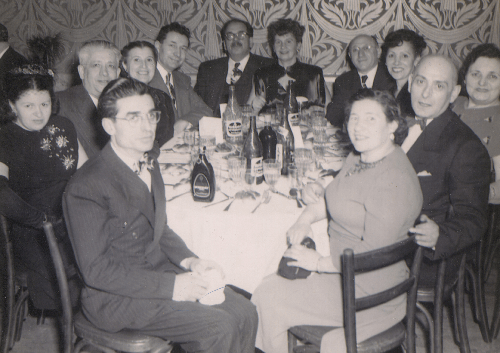 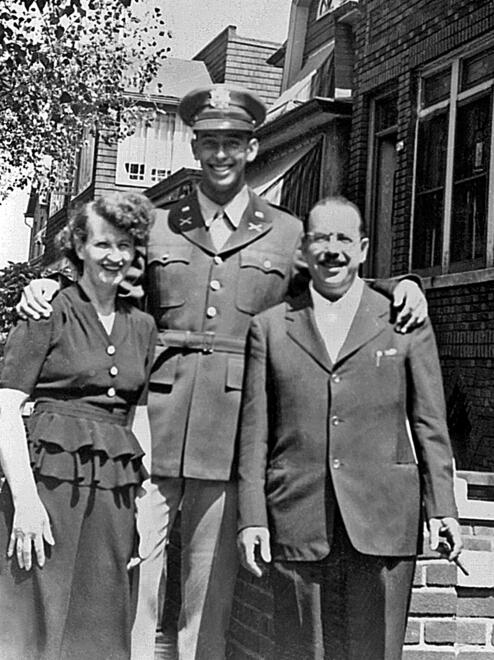 The Family at Mimi's Wedding. 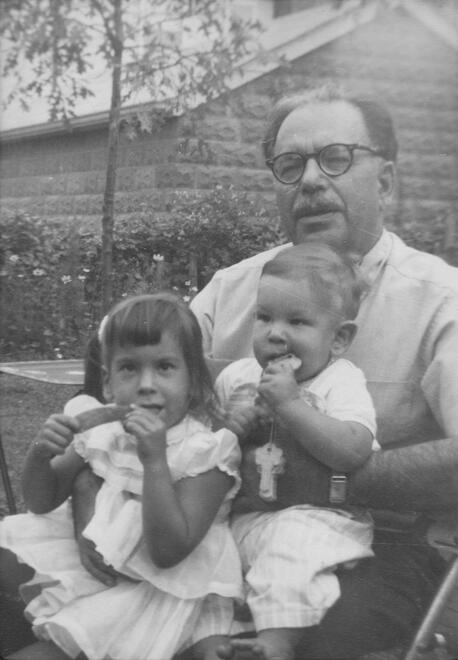 Solomon Simon with his Grandchildren.

To learn more about Solomon Simon, take a look at our oral histories with his children and grandchildren.

This project about about Solomon Simon was made possible by David Simon, z"l.