Jane Fleishman, Northampton-based LGBTQ-rights organizer and educator, was interviewed by Jessica Antoline on April 29, 2010 at the Yiddish Book Center in Amherst, Massachusetts. Jane Fleishman gave a compelling interview about her life beginning with her childhood in Long Beach, New York. Jane grew up in a Jewish neighborhood, surrounded by her immediate and extended family and living near the beach. She recalls having a wonderful childhood and being surrounded by Jewishness (which included going to Hebrew school) but not really knowing that this was not necessarily how the majority of Americans grew up. However, as Jane grew older she became disenchanted with Judaism, left Hebrew school and did not return to Judaism until her years attending Hampshire college when she met other Jewish women in the 1980s who were also struggling to come out as lesbians to their families and friends. Jane now attends the B'nai Israel reform synagogue in Northampton, Massachusetts and is married. Jane has two children, a boy and a girl. Notably, when Jane decided to have children with her wife, she was afraid that her identity as a Jewish lesbian would adversely affect her children's own identity. However, it is clear that today, with two children, Jane makes every attempt to ensure that this will not happen. Jane has regular Shabbes dinners with her family and also makes sure that even as her children attend public school, they also have a Jewish religious education and participate in Jewish rights of passage such as Bar and Bat Mitzvah ceremonies. Jane became especially emotional when describing her children reading from the Torah and obviously sees this as both their achievement and hers in raising her children as Jews. Jane is a confident, intelligent and capable woman and each of these traits come out in her interview. Jane's confidence appears to stem from the closeness and support of her family, who have participated in every major event in her life, from coming out as a lesbian to marrying and having children with a surrogate father. Her family pictures emphasize this closeness and most likely contribute to her willingness to share, rather than hide, her personal stories. Jane is now retired, but spent her working life (and some of her retirement hours) working in public education and political and social activism. She is currently involved in activism to end the Israeli-Palestinian conflict. In describing her involvement in the issue, she recalls that she grew up in an intense time of peace activism in the 60s, 70s and 80s when conflicts and wars such as in Vietnam brought out student protesters across the United States and subsequently shaped how they view conflict today. Jane's strongest message during her interview remains her struggle and eventual comfort with her own identity. Jane's confident self awareness as a Jew, woman, lesbian and mother is a trait she hopes to pass on to her children so that they will not have the doubt and uncertainty she went through as a younger adult.

Jane Fleishman was born in New York, New York in 1954. 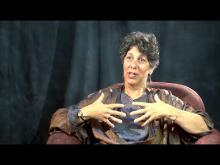 Why We Wanted to Have a Jewish (Lesbian) Wedding 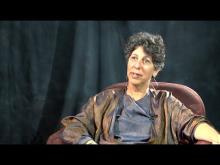 Meeting My Wife at the Synagogue Social