Fran Saed, z"l, longtime resident of New York's Jewish community and former Yiddish Book Center docent, was interviewed by Aaron Lansky on February 25, 2010, at the Yiddish Book Center in Amherst, Massachusetts. Fran discusses her childhood and family connections to the Jewish communities of the Bronx, Brooklyn, Harlem, and the Far Rockaways (Queens) beginning in the 1930s. She provides an account of her two-year attendance at kheyder (Jewish religious school) and her tzedakah (charity) collections for the Tabor Home for Tuberculosis in Denver, Colorado. In this context, she speaks of growing up in a multi-generational household with both Jewish and non-Jewish lifestyles and of her preteen years in the racially and ethnically diverse setting of the Bronx. She goes on to describe the diversity of the surrounding communities, her childhood friends, and her father's many friendships with performers at the Latin Quarter, a nightclub opened in 1942 by Lou Walters at the intersection of Broadway and 47th Street in New York City. Fran shares the various career paths of her family members including finding work during the Great Depression and their employment as a refrigeration engineer, blacksmith, florist, office manager and in electrical engineering with Sperry Corporation on the Polaris submarine program with the US Navy. Fran also discusses the holiday celebrations of her youth, particularly her mother leading the family seders (Jewish ritual feast for Passover), her husband's discomfort in a Conservative shul (synagogue), and her more Orthodox family members acceptance of those less religious. Fran shares stories about memorable Jewish foods including calf tongue and brains, latkes (potato pancakes), gefilte fish (minced fish usually served as patties), and spleen. Fran shares her memories of family visits to the Yiddish theater, including the actors she has seen on stage and the various theaters which her family frequented. Towards the end of the interview, Fran discusses her husband's stepfather and his experiences as a Holocaust Survivor. She describes an instance when her young son inquired about his grandfather's concentration camp tattoo. Fran attributes her father-in-law's survival at Auschwitz and Buchenwald concentration camps to his occupation as a leather tanner. His skills were required to make the harnesses for the prisoners who were used to plow fields. She further expresses her anger at President Roosevelt with regards to the denial of entry to Jewish passengers on the MS St. Louis in 1939. When discussing how she became informed about Zionism and the activities against Jews in Europe during World War II, Fran shares accounts of her parents reading Jewish-American newspapers including Der Tog ("The Day") and Forverts (The Forward), a Yiddish-language daily associated with Socialist Party of America. They also read the "Bintl Brief," an advice column in the Forverts, and her family was in communication with relatives in Odessa, the Ukraine, and Poland. She also shares memories of several New York shuls which played important roles in the development of her Jewish identity: the Intervale Jewish Center in the Bronx and the Baywater Conservative Shul, Congregation Shaaray Tefila, and Congregation Kneseth Israel (the White Shul), all in Far Rockaway, New York. Rabbi Emanuel Rackman, during his tenure at Shaaray Tefila between 1947 and 1967, is noted as an important mentor as she explored her adult Jewish identity. 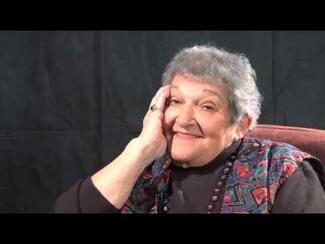 "The Frying Pan Was Always On with Latkes"