Help Us Unpack Our Backlog of Yiddish Books

With your support, we can process thousands of priceless Yiddish books that have arrived since the pandemic began and share them online with waiting readers everywhere.
Donate

More than two million Yiddish-speaking Jews immigrated to America between 1881 and 1924. They came to escape poverty and persecution in the Old Country and to find freedom and opportunity in di goldene medine, the “Golden Land.”

Arriving in Boston, New York, Philadelphia, Baltimore, and Galveston, Texas, they soon spread out across the continent. Wherever they settled, they turned to Yiddish books to master the mores and customs of their adopted home.

Yiddish citizenship guides taught them about the structure of the US government and their rights and responsibilities as citizens of a democracy. Both the National Council of Jewish Women and the Daughters of the American Revolution published such guides; each group was eager, for their own reasons, to help immigrants adjust to American ways.

Other books tutored Yiddish-speaking Jews in etiquette. Brivnshtelers (Letter Writers) offered ready-made Yiddish and English missives for every occasion, from “Note of Thanks for the Loan of a Book” to “From a Lady to a Gentleman Accusing Him of Infidelity and Demanding the Return of Her Letters.”

"A Bintl Brief," the popular column of the Jewish Daily Forward, offered advice on every type of problem, including landlords, bosses, relatives, wayward husbands, and ungrateful, English-speaking children. Even love had to be relearned in America: a card game called Flirt encouraged young people to practice new customs of courtship. 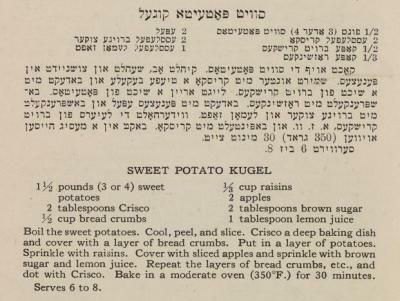 Description:
Cincinnati, 1935. The recipes contained in this book are in English and Yiddish in order to “enable two people (as an example, a Yiddish-reading mother and an English-reading daughter) to work together on any particular recipe.” 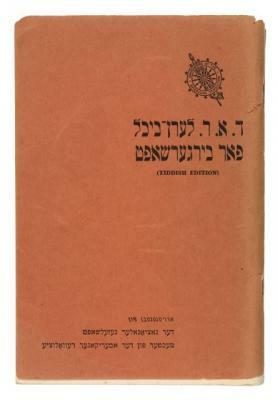 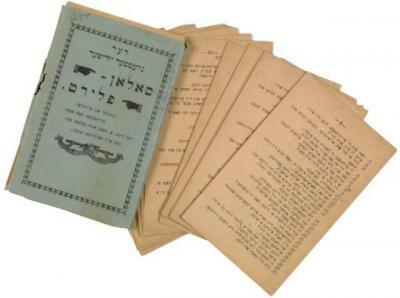 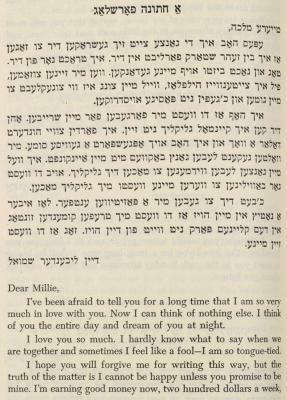 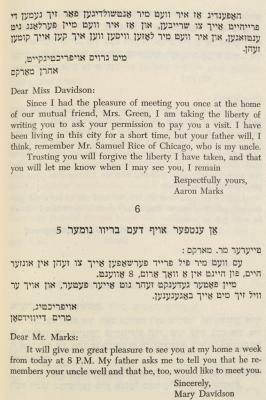 More on Yiddish immigrant culture from our collections

Visit our Decade of Discovery page, on the theme "Yiddish in America: Cultural Encounters," which includes translations of stories and essays, a podcast, recordings and more all about the Yiddish encounter with America.

How Yiddish Changed America and How America Changed Yiddish, with Josh Lambert And Ilan Stavans: a recording of a live talk with the co-editors of this exciting new collection.

Bronx Bohemians blog—a blog about the Yiddish salon of poet and singer Bertha Kling, a haven for many Jewsih immigrant writers and artists in NYC in the early twentieth century.

Yiddish Comes to America, with Lisa Newman and Madeleine Cohen: a recording of our virtual public program about the 2020 Pakn Treger Digital Translation Issue, featuring several translators reading their work.

Immigration and Adaptation: Jewish Women of the Lower East Side, with Annie Polland: a recording of one of our virtual public programs.

In this “From the Vault” essay, Elissa Sperling writes about some of the many books and pamphlets in our collection that were once used by Yiddish-speaking immigrants to America as they adjusted to their new country.

A translation by Sonia Gollance of an excerpt from a Yiddish American etiquette book by Tashrak (Y. Y. Zevin) concerning social mores for women at balls in New York.

Vos yede froy darf visen vegen birgershaft (What Every Woman Should Know about Citizenship), published in New York in 1926 by the National Council of Jewish Women.

A finding aid to the cookbooks and food-related books in our collection, including many Yiddish cookbooks published by American food corporations to further their commercial interests within Jewish communities.