Sholem Aleichem [Shalom Rabinovitz] (1859–1916) was the most beloved of all Yiddish writers. Although there were popular Yiddish authors before him, Sholem Aleichem was instrumental in shaping what we now call Modern Yiddish Literature. He nourished the young literature as a publisher and editor. As a writer, he waged a war to raise the aesthetic standards of Yiddish fiction. He routinely experimented with form and genres: plays, short fiction, story cycles, and epistolary novels, to name but a few. His writings captured the transformation of the Jewish people during what Benjamin Harshav has called “The Time of Revolution,” from the 1880s through the early twentieth century, the period of mass immigration and Jewish social movements that spread the enlightenment, modernity, Zionism, and modern political anti-Semitism. All of these topics are major themes in his work.

The Yiddish Book Center’s collections feature a trove of material by and about Sholem Aleichem, including translations, digitized editions of rare volumes, oral histories, and secondary sources. What follows is a guide to these varied holdings, and a selection of external resources.

1. Di yudishe folks-bibliotek (the Jewish People’s Library), published in Kiev in 1888. Sholem Aleichem was not only the most beloved Yiddish writer, he was one of the most important figures in the development of Yiddish literature. Edited and published by Sholem Aleichem, the aim of this miscellany was to sustain and nourish Yiddish literature, then in its infancy. It features important early publications by Mendele Mokher-Sforem and I.L. Peretz’s poem Monish.

2. Sholem Aleichem’s most famous literary creation is unquestionably Tevye, the Dairyman. Today, American audiences primarily know the character of Tevye through the stories’ transformation into Fiddler on the Roof. But Fiddler was only one of many theatrical and cinematic adaptations of Tevye. Our Academic Director Josh Lambert’s resource kit for teachers is a fantastic introduction to Tevye’s many transformations.

6. A bonus sixth holding! Listen to this recording of Sholem Aleichem’s beloved story “On Account of a Hat.” 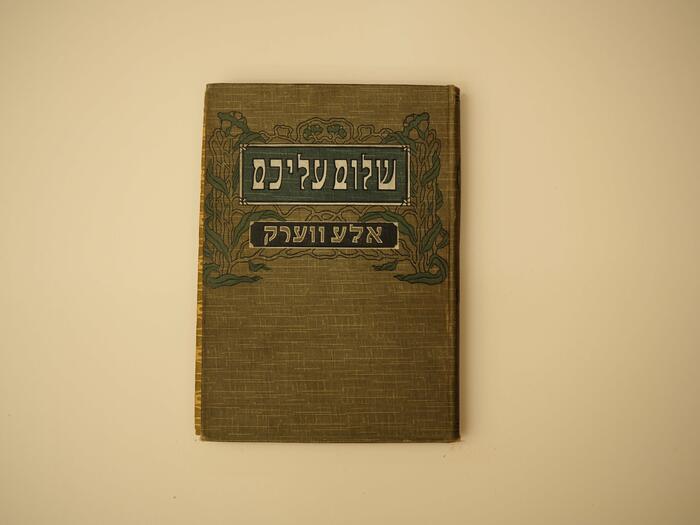 A 1909 edition of Sholem Aleichem's work "re-worked and improved." 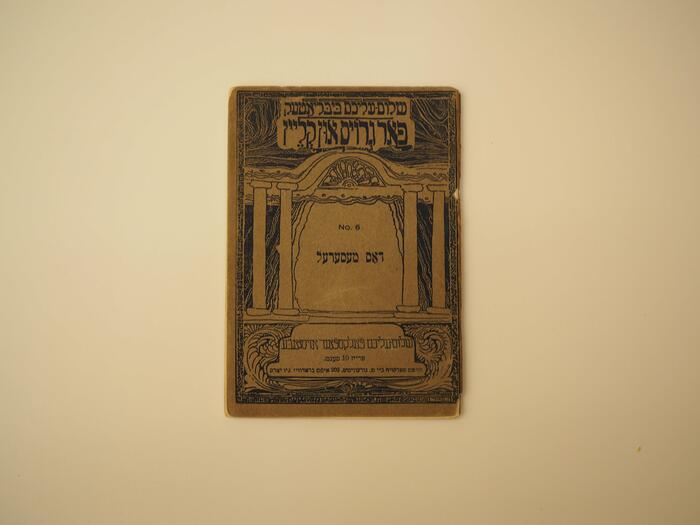 A 1918 edition of Sholem Aleichem's Dos meserel (The Pocket Knife) from a longer series of his collected works. 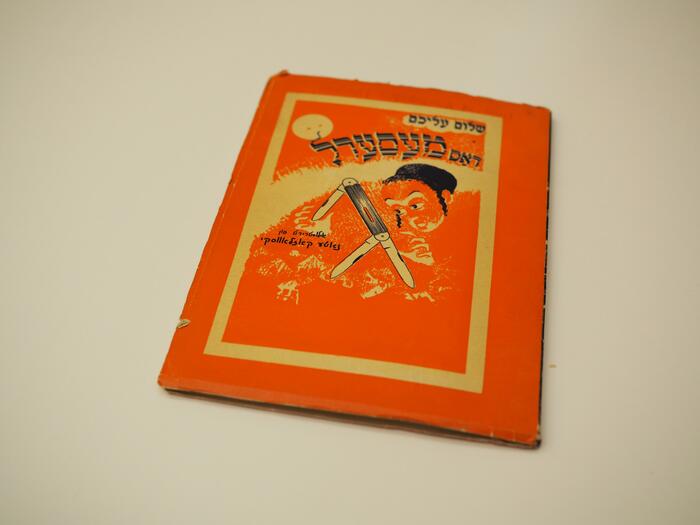 The bright cover of a 1937 illustrated edition of Dos meserl published by Kinderring. 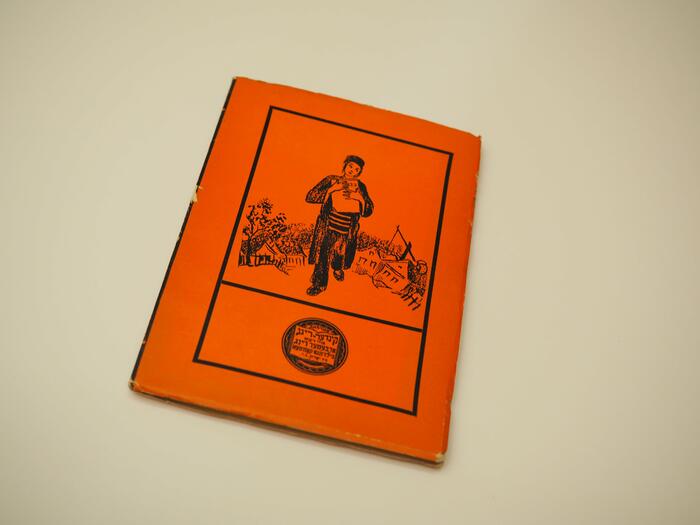 A beautiful illustration by Nota Koslowski graces the back cover of the 1937 Dos meserl. 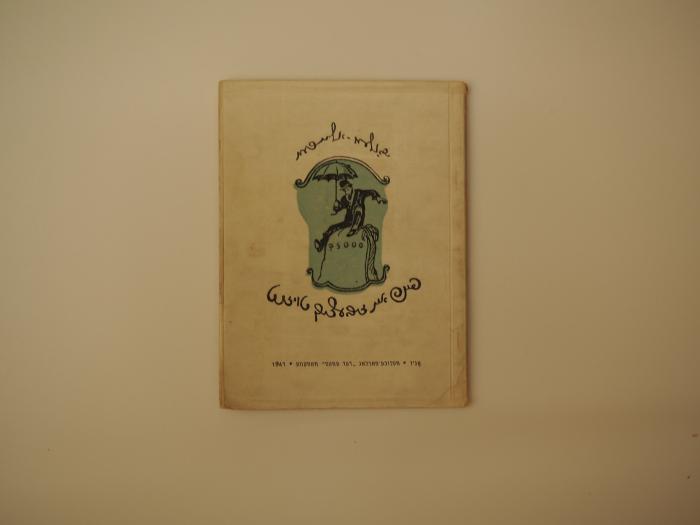 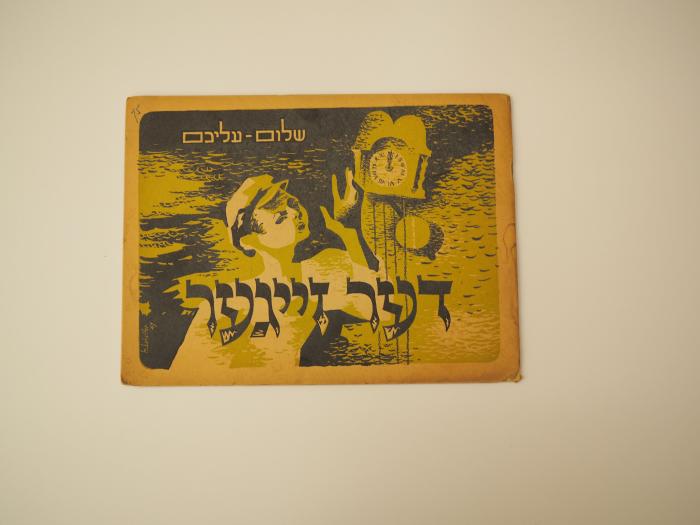 Sholem Aleichem's Der zeyger (The Clock) comes to life in this 1947 illustrated edition from Paris. 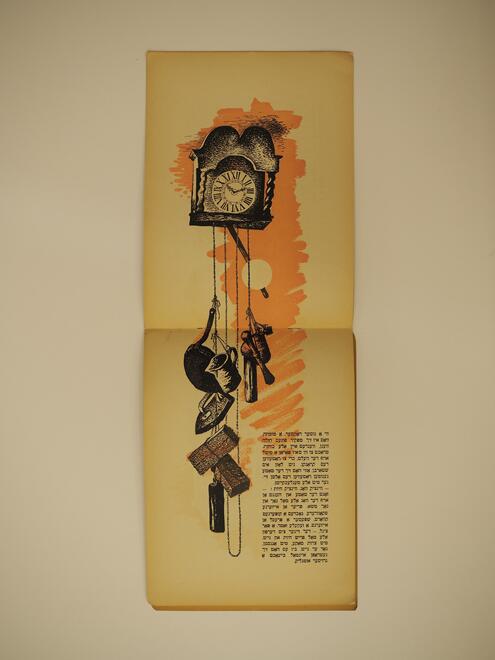 The main clock of Der zeyger appears laden with household junk in this two-page spread. 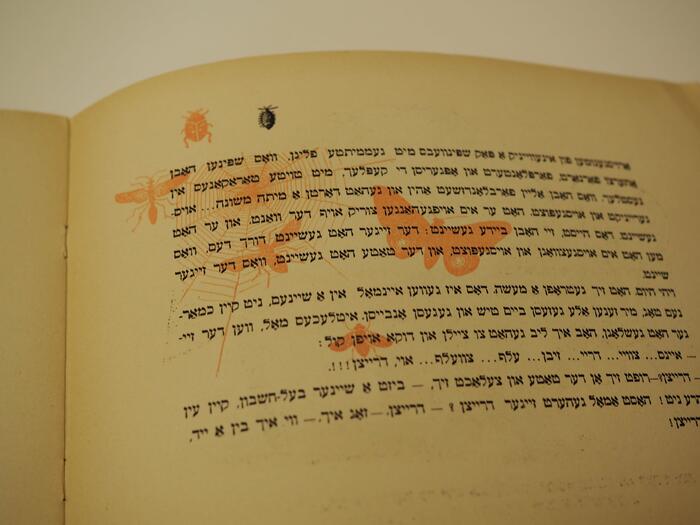 Small creatures are a welcome edition to this sixty-year-old book! 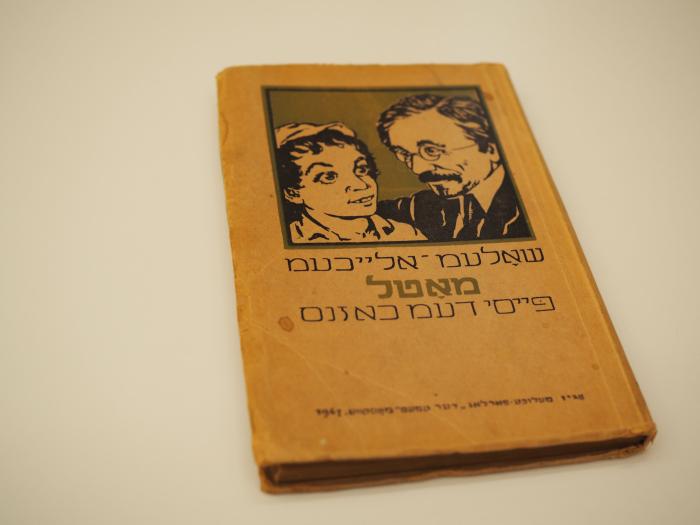 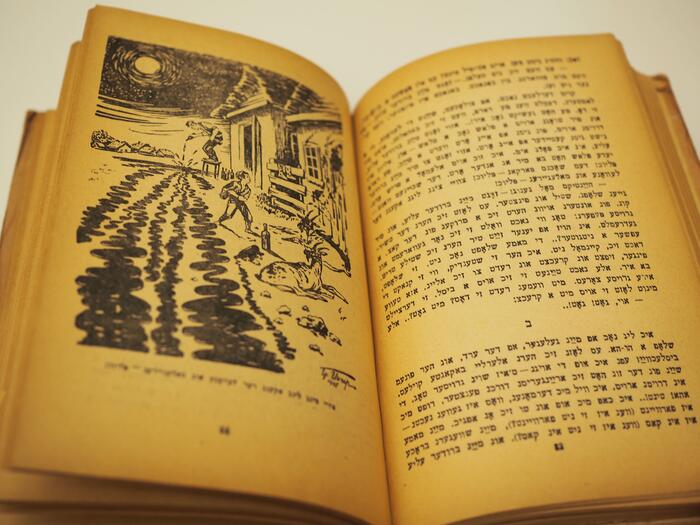 Motl and his midadventures are deftly illustrated by Soviet Jewish artist Gersh Inger. 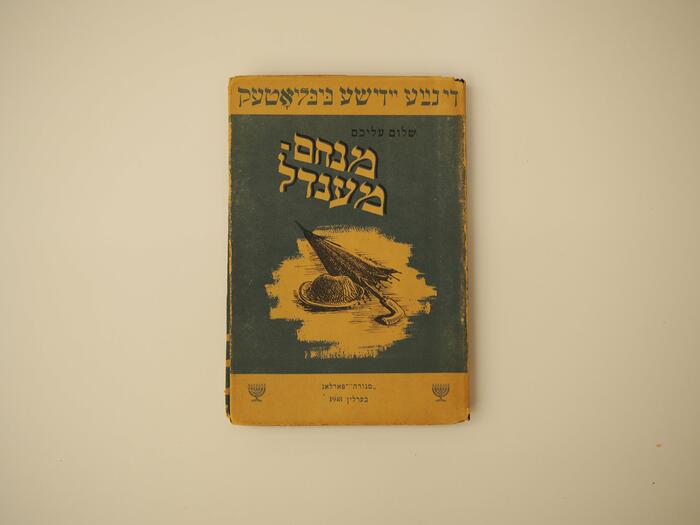 Published in Berlin just after the end of WWII, this 1948 edition of Sholem Aleichem's Menakhem Mendl is a testament to the endurance of Yiddish cultural production. 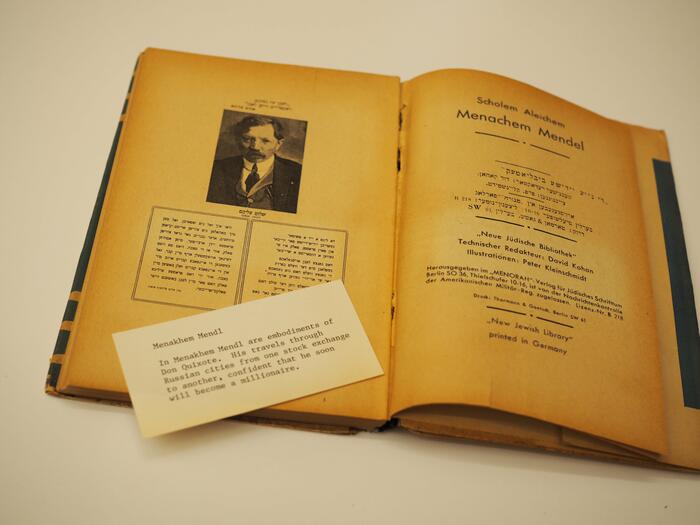 A note to the reader promises a quixotic tale. 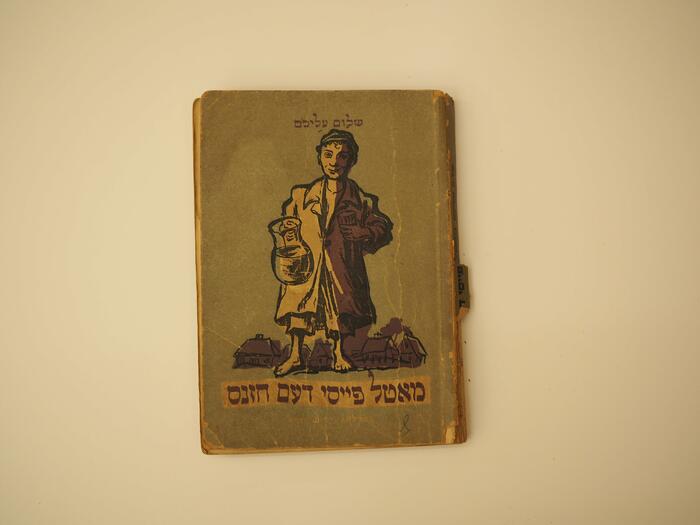 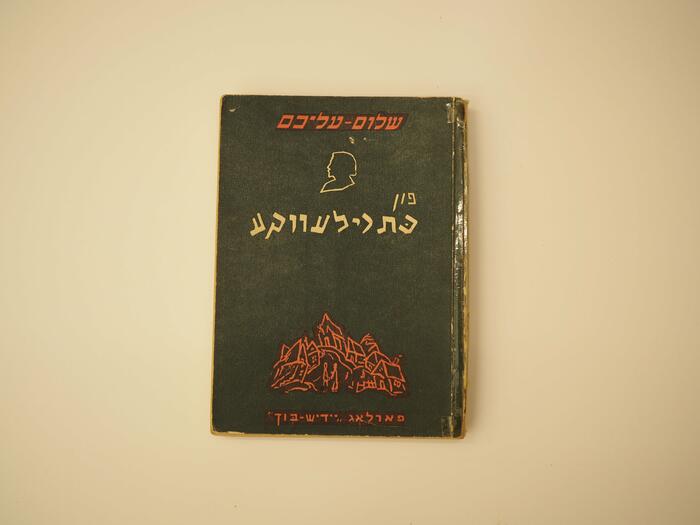 Sholem Aleichem's fictional shtetl is featured in this 1959 edition of Fun Kasrilevke published in Warsaw.

Although there is no “wrong way” to start with Sholem Aleichem, readers looking for an introduction to his work may enjoy one of the volumes designed for use in Yiddish schools. This volume, Kitser sholem aleykhem (The Abbreviated Sholem Aleichem), published in Buenos Aires in 1953, contains excerpts from his major works and some of his best known short stories.

Another interesting place to begin is Sholem Aleichem’s letters. One of his most famous and enduring works is his epistolary novel, The Letters of Menakhem Mendl and Sheyne-Sheyndl. Menakhem-Mendl is, in Dan Miron’s memorable words, “the characteristic Homo economicus, who reduces everything to its market value (although he never understands the rules of the market)." The book, as the title implies, is a series of letters between husband and wife: his letters represent Jewish fantasy, while hers are grounded in reality and lived experience. This edition published in Berlin in 1948 speaks to the book’s popularity.

Letters, however, were not simply a literary device for Sholem Aleichem. Sholem Aleichem was a voluminous letter writer, as evidenced by this 700-page, partial collection of his correspondence. The letters are an incredible resource for scholars as well as a delightful read.

This memorial volume, likewise, contains incredible resources for Yiddish scholars. It features historical photographs from Sholem Aleichem’s funeral as well as examples of his handwriting.

Finally, we recommend exploring one of the most important books in Yiddish literary history. Published the same year as Di yudishe folks-bibliotek, Sholem Aleichem’s 1888 chapbook, Shomer’s mishpet (The Trial of Shomer), was an important act of boundary setting. In this volume, Sholem Aleichem put the popular Yiddish writer Shomer (Nokhem Meyer Shaykevitch) and the entirety of Yiddish popular fiction on trial. Shomer wrote sensational chapbooks. And you can find fantastic examples of these in our collection, such as Halb mentsh halb affe (Half Man Half Ape) and Der Id un di grefin a hekhsṭ inṭeresanṭer un rirender roman : fun di Rusishe emigranṭen in Ameriḳa (The Jew and the Countess: A Highly Interesting and Moving Novel of Russian Emigrants in America). Sholem Aleichem used the form of the trial to advocate for a more literary, less-sensationalist and melodramatic Yiddish fiction.

In addition, two volumes of short fiction are included in the Rohr Library: Fun kasrilevke, a selection of stories about Kasrilevke, Sholem Aleichem’s fictional shtetl/Jewish city, and a general volume of selected stories. For those interested in reading along with the Yiddish, copies of each story are available in our Steven Spielberg Digital Yiddish Library.

The Yiddish Book Center’s Frances Brandt Online Yiddish Audio Library also contains a number of fascinating public programs and lectures about Sholem Aleichem. In a particularly insightful lecture, Chone Shmeruk, then professor of Yiddish at Hebrew University, unpacked Sholem Aleichem’s ambivalent relationship with America. On the one hand, Sholem Aleichem was an ardent Zionist. On the other hand, he recognized the significance of America as sanctuary for a Jewry in crisis.

In principle, there can be no doubt that his ideal was the settlement of the land of Israel. The apparent contradiction of his own ideology did not, however, prevent him from apprehending and predicting the role of immigration to America in the course of Jewish history. He was certain that the hand—this is his word—of divine providence revealed itself in the very possibility of Jewish immigration to America, that God’s providence had created, in time, a solution for the Jews of Eastern Europe, who needed or wanted to flee. Sholem Aleichem’s belief in divine providence in regards to Jewish immigration to America was expressed in his writing both long before 1906, at the very outset of his writing, and later in America, in the last years of his life. 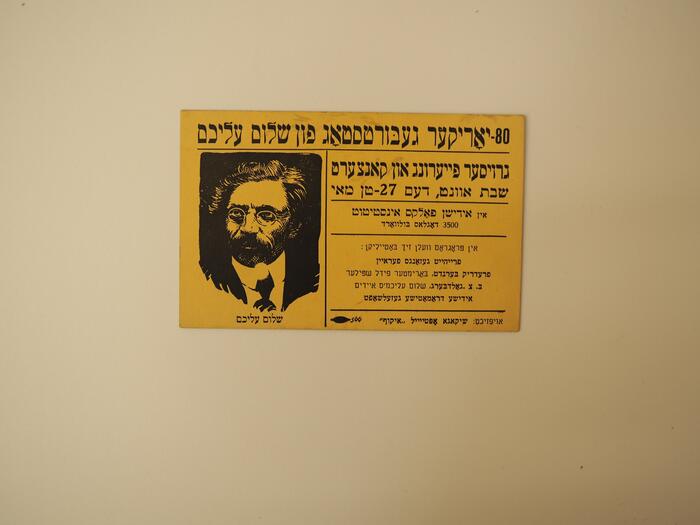 Tucked away in an old volume, this yellowed postcard announces the Chicago branch of YKUF's [Yidisher Kultur Farband] eightieth-birthday celebration for Sholem Aleichem. 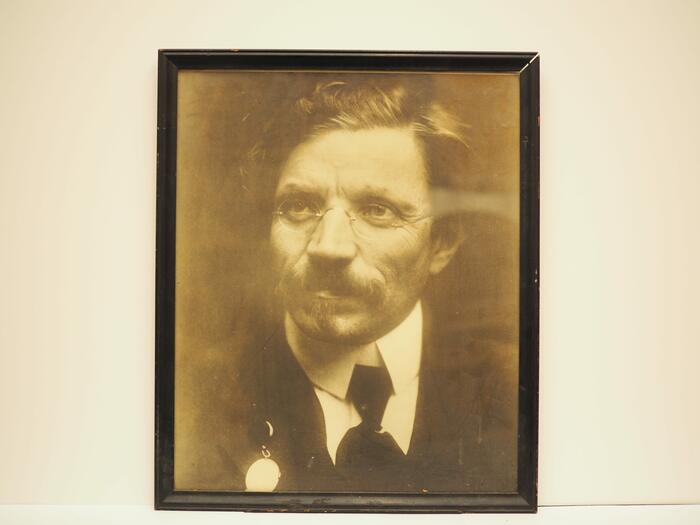 Often likened to Mark Twain for his literary stylings, here Sholem Aleichem strikes a similar pose to those captured of his predecessor. 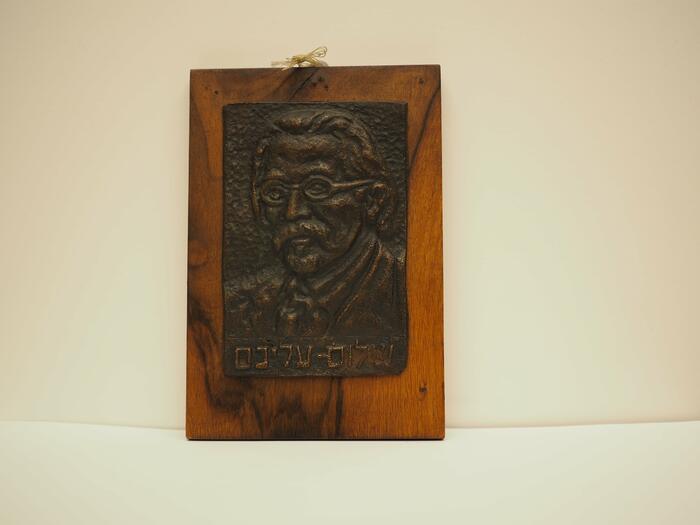 As one of the most popular writers in the Yiddish canon, Sholem Aleichem's likeness appears on a range of objects far and wide. 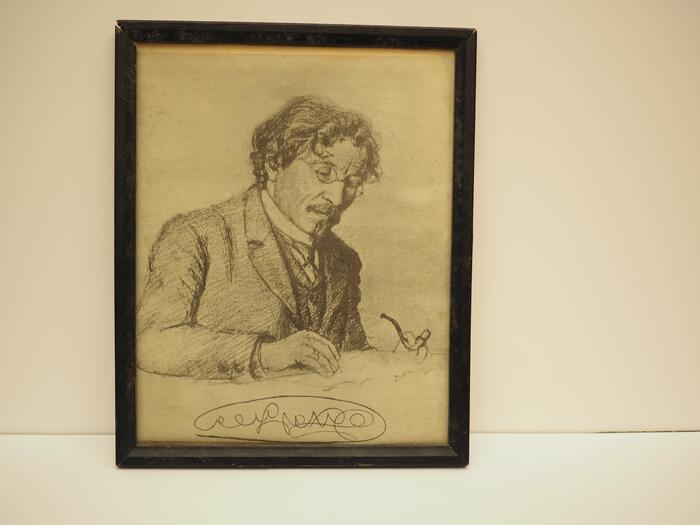 The loopy and circular Yiddish signature of Sholem Aleichem can be seen at the bottom of this pen-and-ink illustration. 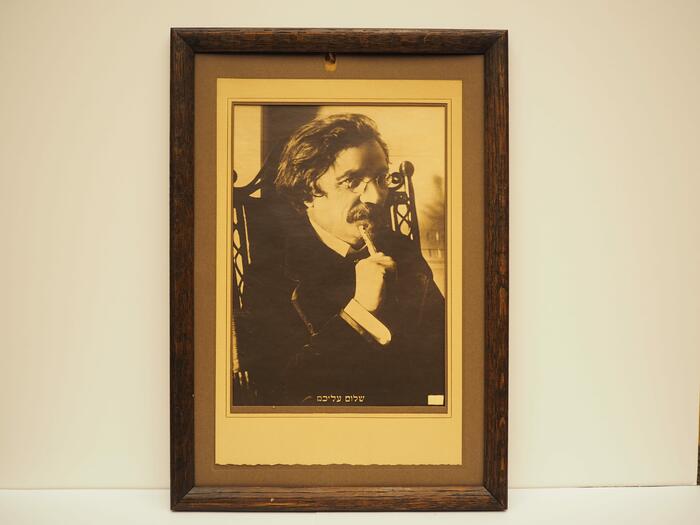 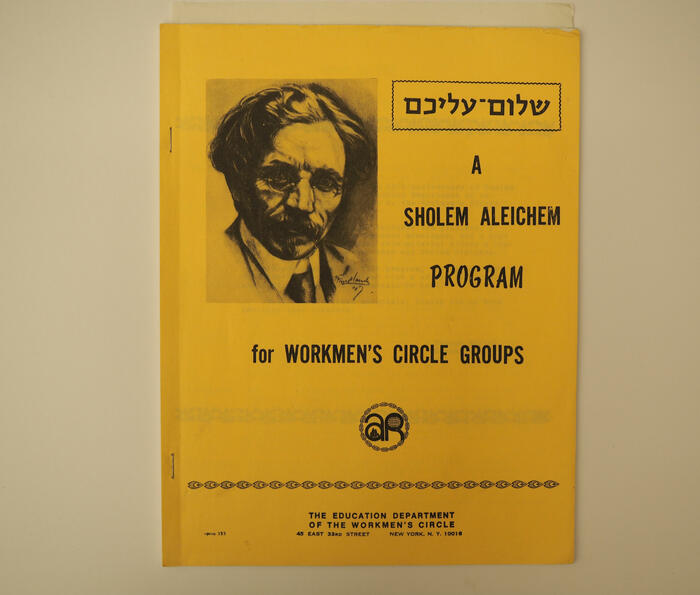 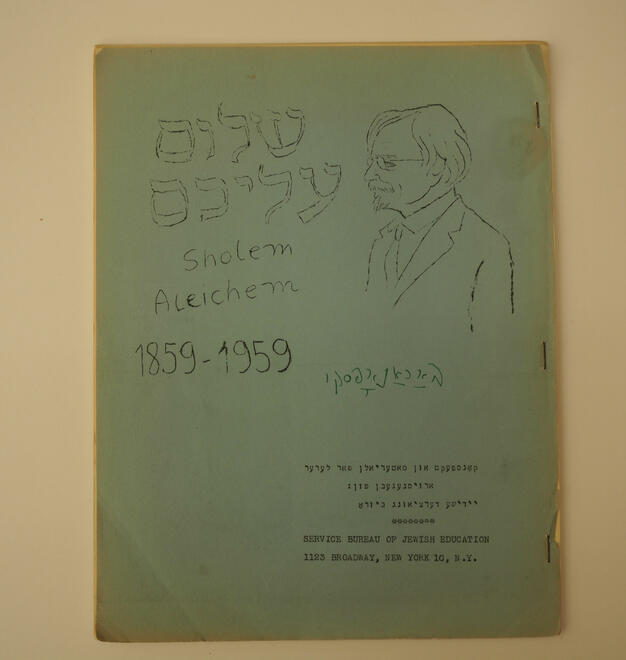 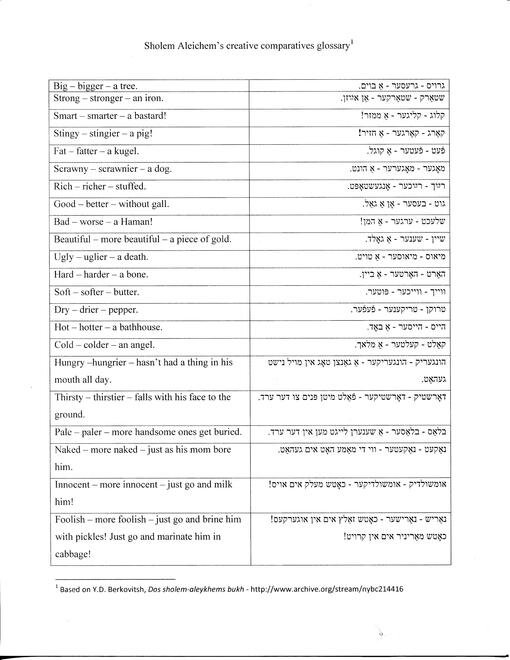 A more-recent lesson plan for teaching the Yiddish comparative, based on Sholem Aleichem's writing 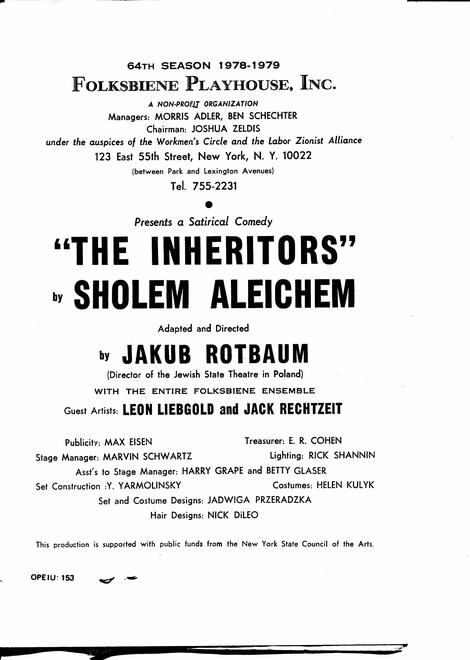 Playbill from a production of Sholem Aleichem's The Inheritors 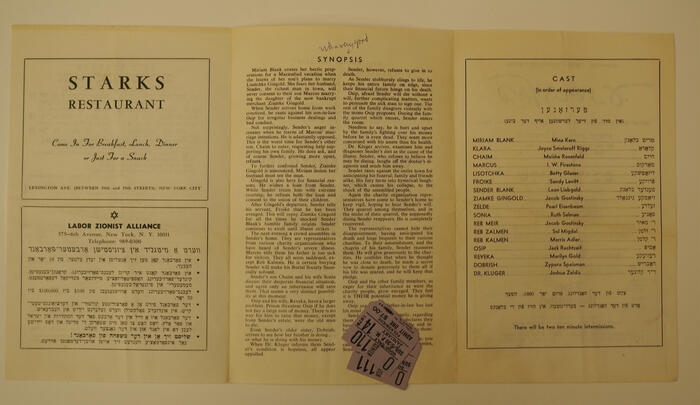 Interior of the playbill from the production of The Inheritors. Note the tickets stapled inside. 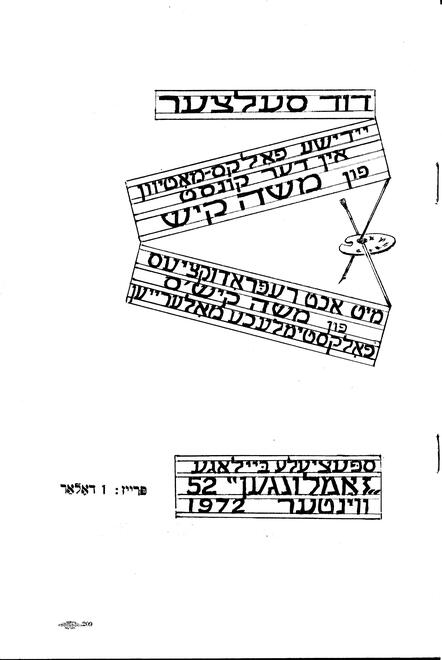 A booklet—or special issue of a journal—devoted to exploring Jewish folk motifs in the work of Moyshe Kish [Maurice Kish]. 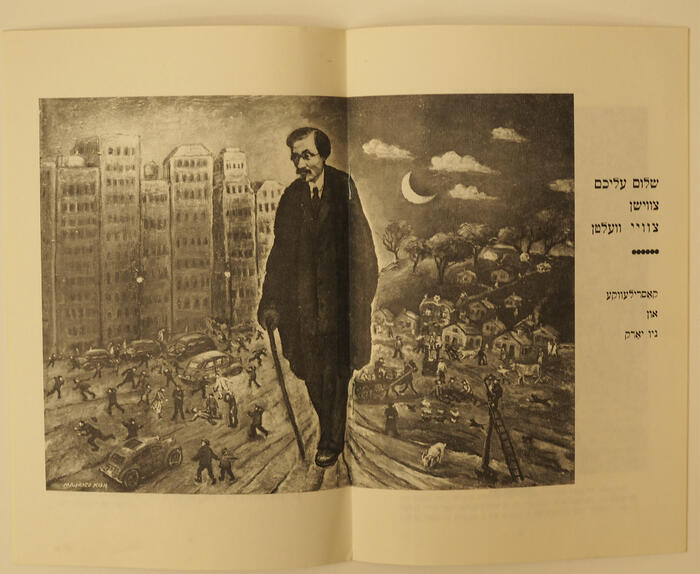 Interior centerfold of the booklet. The artwork is titled "Sholem Aleichem Between Two Worlds—Kasrilevke and New York."