Sunday in the Park with Bertha

Smiling and squinting into the camera, cigarettes mid-smoke, a group of friends gathers for a photo in a New York park. It’s the sort of picture you might glance at and move on. But that would be to miss a singular moment of Yiddish cultural history. For this rare archival image captures the last members of a brilliant poetic generation on the eve of its passing. As penniless young immigrants in New York, they upended the conventions of Yiddish verse. By day they worked as shoemakers, paper-hangers, and typesetters. At night they debated poetry in cafés and in the Bronx home of singer-poet Bertha Kling. That was back in the 1900s and 1910s. Almost half a century later, they meet once more in the bright sunshine of a New York park.

In the middle of the photograph, frowning or lost in thought, is Mani Leib, his face craggy, lined, unmistakable. A prince among poets, he was revered by adult and child readers alike. Also in the middle row are three other giants of American Yiddish poetry: Ephraim Auerbach, broad-shouldered, suit freshly pressed, perches on a chair arm; further along, Joseph Rolnick and I. J. Schwartz flank Mani Leib like lieutenants by their general’s side. A battle-scarred trio, they were central figures in Di yunge (Young Ones), the rebel poets who wrote a new page in Yiddish literary history. Before them, Yiddish poets looked pale and tubercular or dreamy and romantic. Di yunge pulled their hats down low and turned their coat collars up; menacing rather than maudlin, they looked like a gang of toughs.

Bertha Kling stands at the back; white-haired and soft-cheeked, she exudes contentment, happy to be among old friends. Her husband, Dr. Kling, sits next to Mani Leib. Two more writers were identified after we posted this image on facebook: Rashel Veprinski, a poet, novelist, and Mani Leib’s partner, sits on the grass on the far right, and the educator B. J. Bialostotzky is second from left in the same row. The woman at the back with her hand resting on Mani Leib’s shoulder is identified on the back of the photo as Feyge Rolnick, wife of the poet.

This buccolic image, found among the Bertha Kling Collection at YIVO, still holds some secrets. Who are the others? When exactly was the photo taken, and on what occasion? And beyond the puzzle of names and dates, what were the ties that bound this group of old friends? Some of these are known: Eastern European childhoods, arduous migration journeys, capacious Jewish learning, and unshakeable devotion to the Yiddish word were common to all these writers.  They consoled each other through wrenching family separations, the anxieties of immigration and Americanization, and literary schisms and setbacks. These shared experiences, along with simkhes, and any amount of high jinks and carousing, were woven into tightly braided friendships.

In a sense, this photograph represents their curtain call. By 1950, Bertha Kling's salon was in decline; by 1955, both Mani Leib and Rolnick were dead. All the more reason then to remember the epic sweep of these writers’ lives, and the rich legacy of Yiddish poetry created on American soil.

Bertha Kling was a Yiddish singer, an occasional composer, and a poet who published three volumes of Yiddish verse. Deeply artistic, she nonetheless seems to have prioritized her role as a salon host and literary confidante over her identity as a writer, at least in the early years. A person of exceptional sociability, her surviving correspondence reveals her to have kept in lifelong contact with dozens of leading Yiddish writers and literary figures on several continents—including all the writers in this photograph. Yekhiel, her husband, was a Bronx physician and a medical inspector with New York City’s Bureau of Tuberculosis. He was on close terms with many of the writers in the Klings’ circle and was also a founder of the Sholem Aleichem Folk Institute, a leading sponsor of Yiddish schools and summer camps. His letters to Bertha from the early years of their marriage (always addressed to ‘Mama’ or ‘Mamochka’ ) reveal him to have been keenly encouraging of her first literary efforts.

Born in Russia in 1883, Mani Leib was one of eight children in a poor home. He was an apprentice bootmaker as a child and a teenage revolutionary, twice arrested. In America he was at the heart of the group of young modernist immigrant poets known as Di Yunge (Young Ones). A shoemaker and an acclaimed and popular lyric poet, he was intensely creative as a young man, but plagued in middle and later life by self-doubt, tuberculosis, and the weight of domestic cares.

Mani Leib was a regular visitor to the Klings’ home in the Bronx. Occasionally, after a late night party, he would stay over, sleeping on the high, narrow examining table in Dr. Kling’s consulting room. Seemingly incapable of holding down a job for long, or creating a stable home, Mani Leib lived much of his life as a semi-nomad. That all changed on his sixtieth birthday, thanks to an extraordinary gesture. His friends, the Forward newspaper, and labor unions set up a fund for readers to contribute to buy the beloved poet a home of his own. In 1946, Mani Leib was finally presented with the keys to a small house (“my villa”) in Far Rockaway, close to the ocean. His last years were some of his most creative. I. J. Schwartz, his old friend, was so impressed by Mani Leib’s late sonnets, that he wrote to him, asking, “How did you grow so wise?”

In the bottom right of the group photo (no. 16) is a woman with a dazzling smile wearing an elegant jacket. After some discussion on Facebook, Sheva Zucker suggested: “ I think [she is] Rashel Veprinski, Mani Leyb's lebns-bagleyterin (life-companion).” Others agreed, and indeed her appearance matches the few known photos of Veprinski. Born in Ukraine in 1896, Veprinski came to New York in 1907 and started work in a shop at age thirteen. In 1918, she published her first Yiddish poems and began a stormy, passionate relationship with Mani Leib, who left his wife and five children to be with her.

In her book A Little Love in Big Manhattan, Ruth Wisse notes that Veprinski had five abortions during her years with Mani Leib, “not because the couple did not want children of their own, but because they knew they could not support any more.” In 1971 Veprinski published an autobiographical novel Dos kraytsn fun di hent (The Crossing of Hands). According to Anita Norich, “It's clearly a roman a clef about Di yunge . . . there's lots of very thinly veiled talk about sex and desire, lots of love-making, several cafés, an abortion, jealous wives, and a good deal about a couple who I'm pretty sure are [Yiddish writers] Anna Margolin and Reuben Iceland. And a line about America having women writers because middle class American women have free time.”

I. J. Schwartz, David Ignatoff, Moyshe Leyb Halpern, and Joseph Opatoshu, pictured above in their mid-twenties, all immigrated to America from Russia in the years 1906–08. For a while, they all roomed in the Bronx and were regulars at the Klings’ literary salon. Schwartz, however, stood out by virtue of his early success and self-confidence. By 1910, his friend Isaac Bloom recalled, many in their circle were still developing as writers but “Schwartz wasn’t ‘becoming’, he already ‘was’—he was an experienced writer and translator for whom all literary journals were open, and he published wherever he wished . . . his own Yiddish poems, or translations from Hebrew or from English classics.”

The son of a rabbi and fluent in Hebrew, I. J. Schwartz (1885–1971) was a lifelong translator of Hebrew poetry into Yiddish. He was deeply attached to Jewish religious and historical themes, but was also acclaimed as a poet of nature. Like almost all the American Yiddish writers of his generation, Schwartz engaged deeply with American themes, most famously with his 1925 verse epic Kentoki (Kentucky), about a Jewish immigrant finding his place in the new land. Between 1918 and 1928, he lived in Lexington, Kentucky, where he built a business. His later decades were spent in New York and Florida. 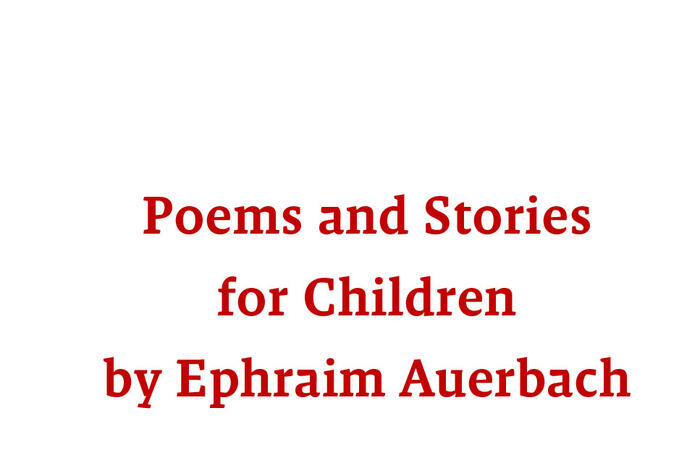 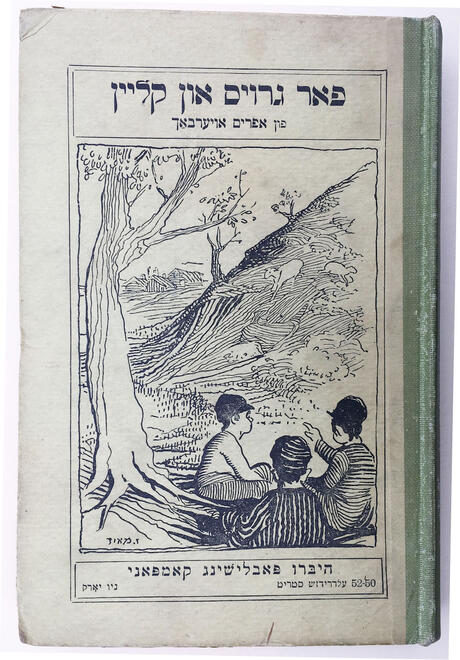 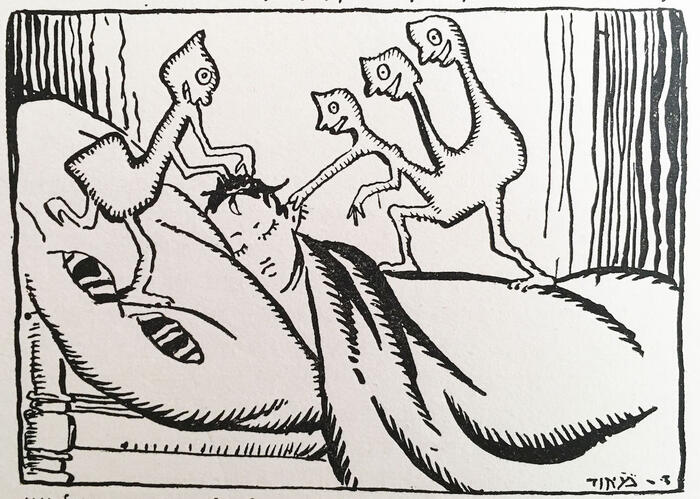 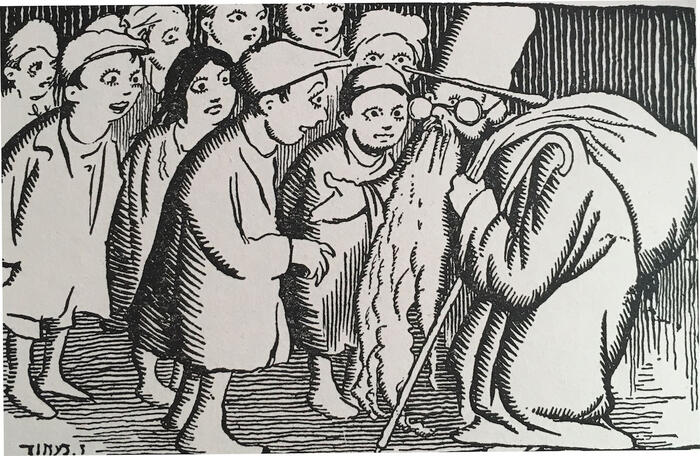 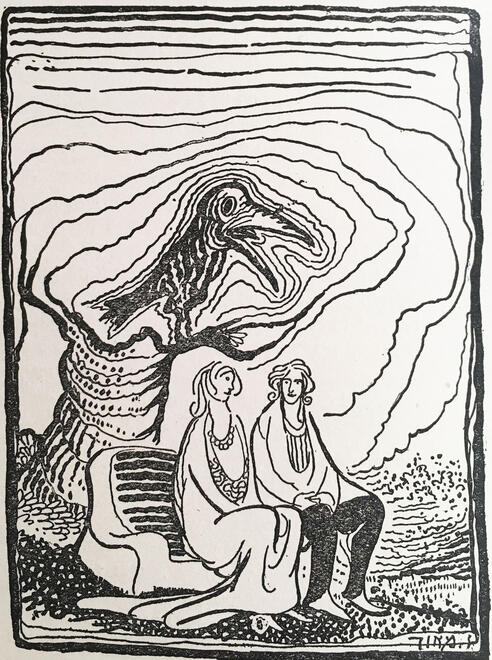 “The black raven sat in a tree and shrieked over their heads . . .” (illustration by Zuni Maud) 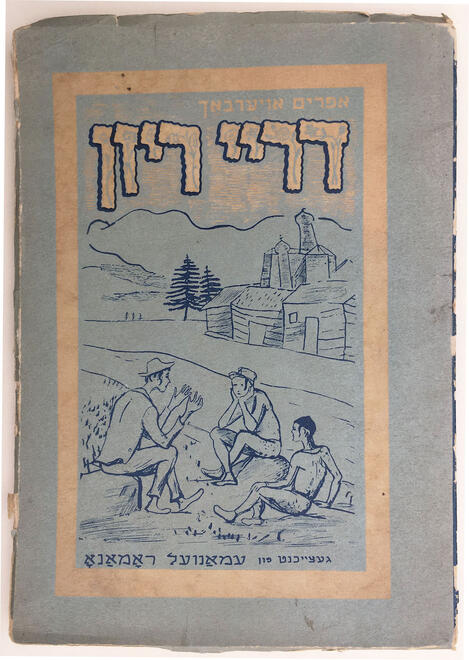 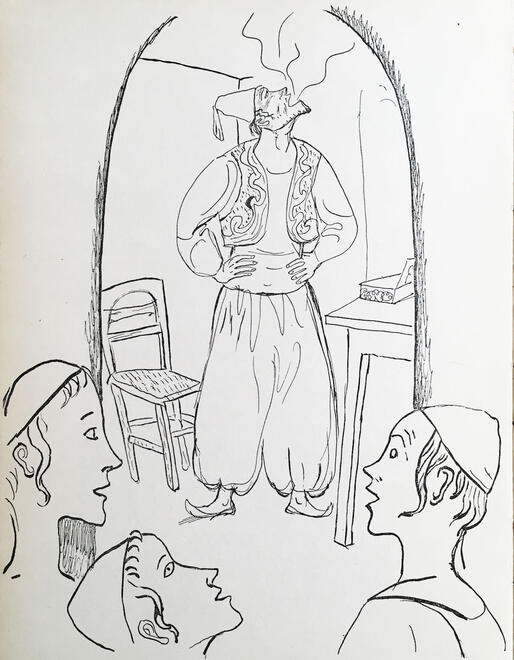 The Fire-Breather (illustration by Emanuel Romano) 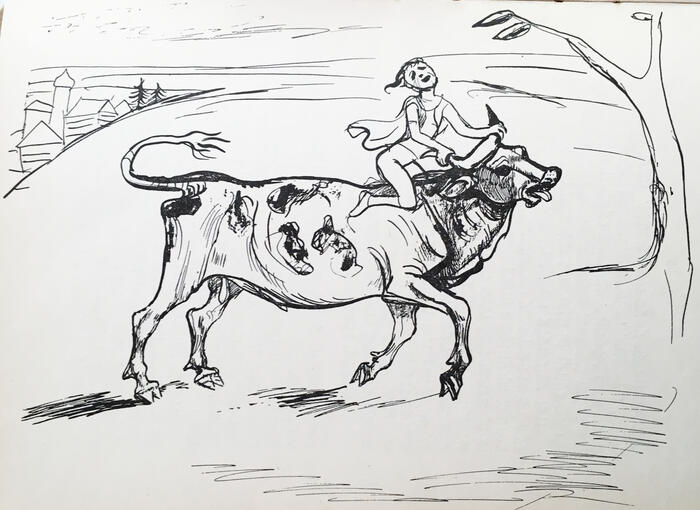 "The goblin was riding the ox, it was terrifying to watch" (illustration by Emanuel Romano) 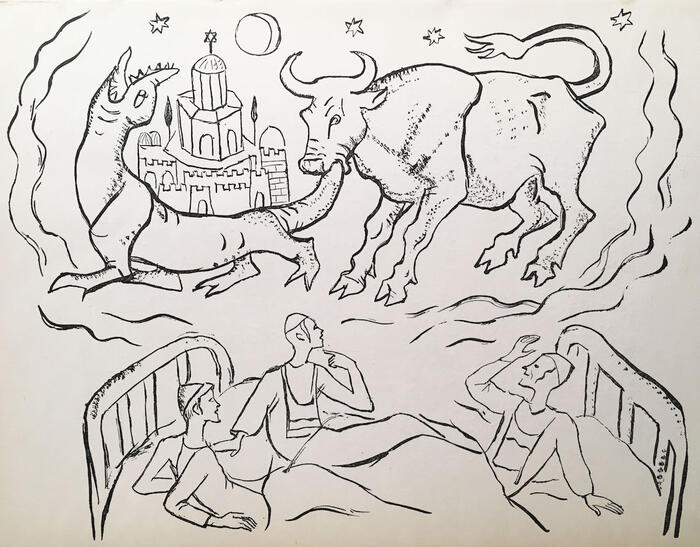 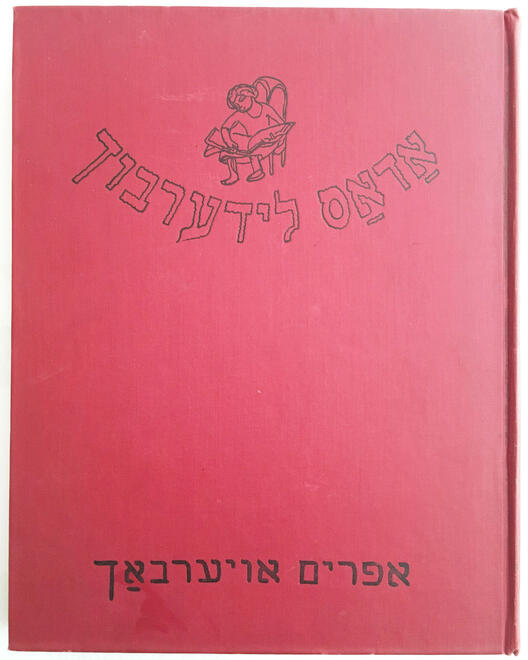 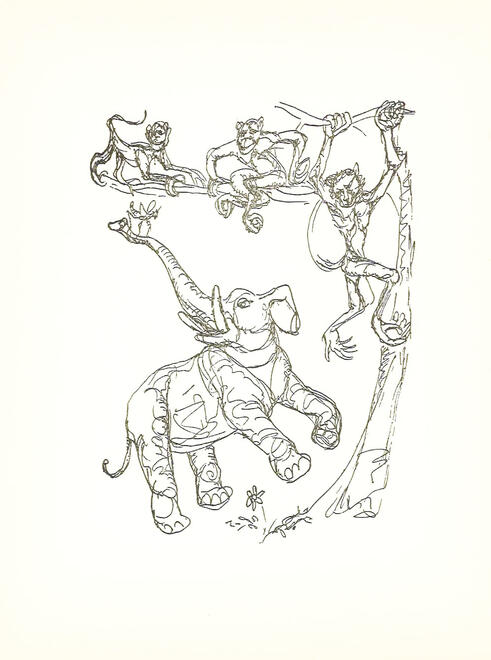 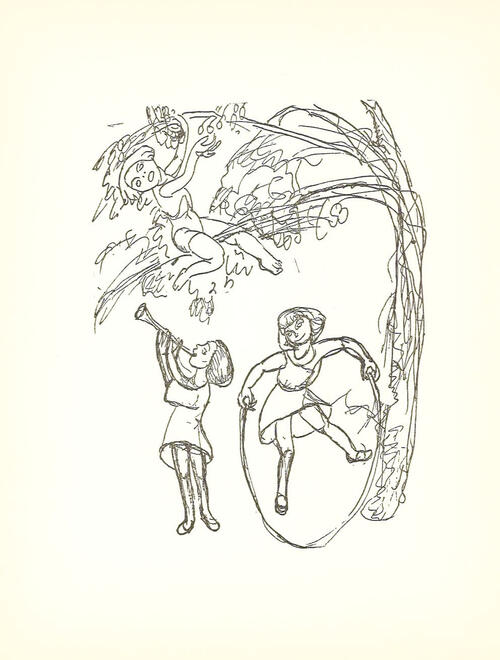 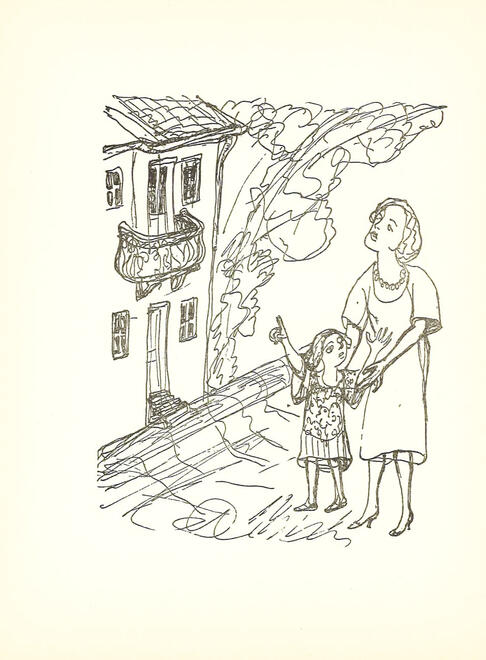 Ephraim Auerbach or Froym Oyerbakh (1892–1973) was a prolific poet, essayist, and translator, who had close ties to the Klings both personally and professionally. Born in Bessarabia, he was the son of a Hasidic shoykhet (kosher slaughterer). Auerbach was privately educated, and by the time he was seventeen he had published stories and poems in Russian, Hebrew, and Yiddish. In 1912, he moved to Palestine; he joined the Jewish Legion during WWI and saw action in Gallipoli before being demobilized and emigrating to the United States in 1915.

In addition to his writing, Auerbach was an energetic and effective activist for a wide range of Yiddish cultural and educational causes. For many years he taught in the Yiddish schools run by the Sholem Aleichem Peoples Institute, whose president was Dr. Kling. Auerbach was also president of the Yiddish PEN Club, of which Bertha Kling was an active member. Among many other roles, he was one of the founders of CYCO (Central Yiddish Cultural Organization, Tsentrale yidishe kultur-organizatsye) and president of the League for the Rights of Yiddish in Palestine (Lige far rekht fun yidish in erets-yisroel).

Joseph Rolnick (1879–1955) was one of the leading poets of Di Yunge in their springtime years and a close companion of both Mani Leib and I. J. Schwartz. Success as a poet, however, didn’t help Rolnick overcome his inferiority complex and introvert nature. “I lacked the knack,” he wrote, “not for personal friendship, but for fellowship . . . With Di Yunge, we read poems to each other and sat in the restaurant day and night . . . but we were only good friends when I was with Mani Leib alone, with [Zishe] Landau alone, or with [David] Ignatoff or [Reuben] Iceland. When we were all together, I became a fifth wheel on the wagon.”

Like all the members of Di Yunge, Rolnick was a frequent guest at the Klings’ home in the Bronx. Ever ready to snatch despair from triumph, Rolnick’s memoirs relate what happened when Bertha Kling set to music an early poem of his, which he thought best forgotten: “The poem became very popular; they began singing it at all the literary meetings . . . and celebrations. As soon as I entered the hall, I was greeted by that song . . . it began to disgust me to hear it. When I heard the song being sung, I would immediately sneak out of the hall.”

Thanks also to Sasha Stern for her work on this post.

We welcome any comments or suggestions about this post or the identity of people in the group photo. Please write to [email protected].